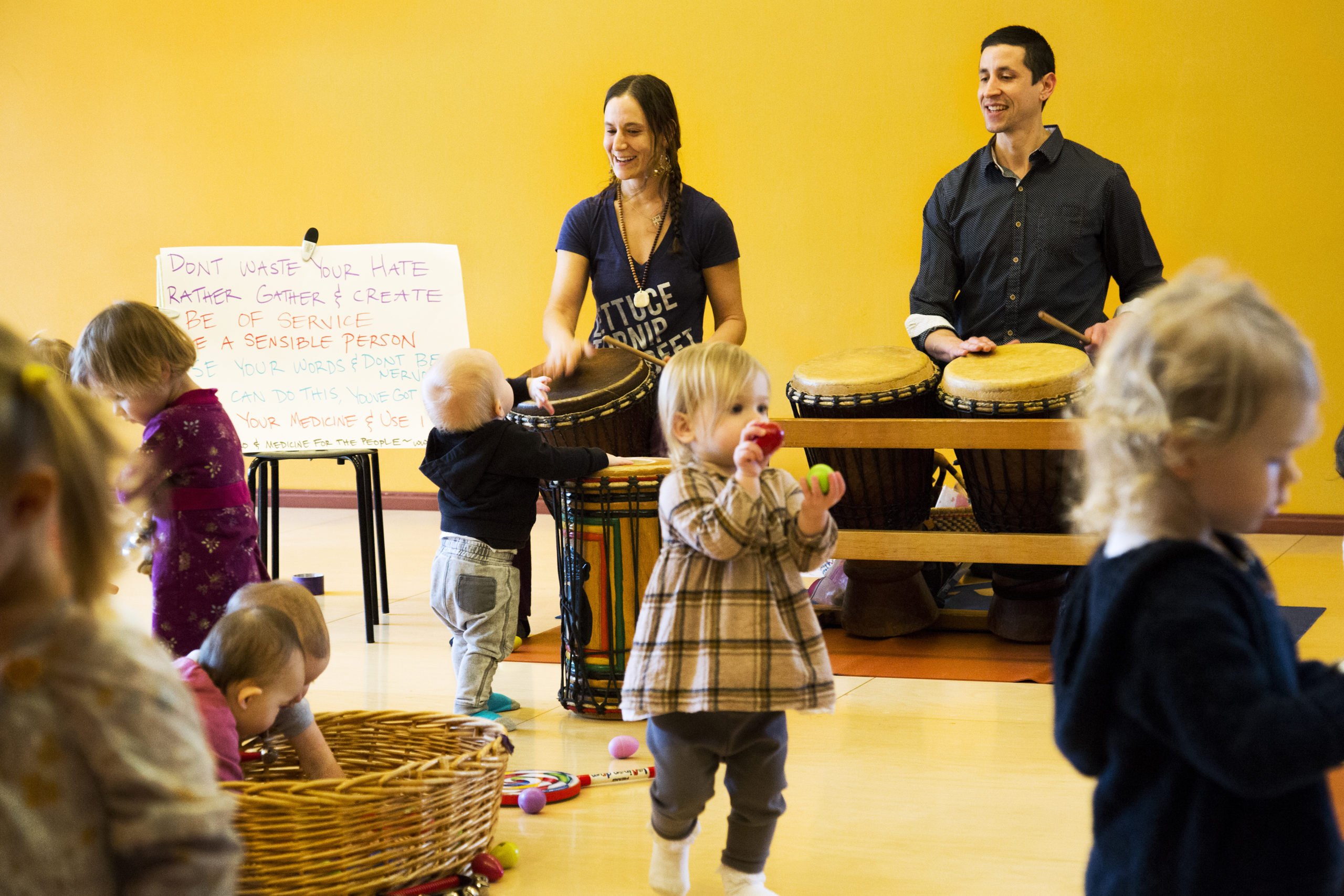 This Seattle couple’s passion for music and learning is on display every week at Baby Jam, a drop-in music and movement class they created for kids from birth through age 3 and their parents or caregiver. In a light-filled Fremont studio, babies crawl around, and toddlers energetically grasp colored shakers, moving to the beat.

“It’s a safe place for everyone to come and be themselves and experience the beauty and comfort of music,” says Kessler, wearing her signature “Lettuce Turnip the Beet” T-shirt. “We want them to be free to explore.”

Though both Cisneros and Kessler are educators, formal instruction is not their goal.

“We’re not trying to teach anything, but rather allow kids to experience the rich tapestry of music and art,” Cisneros says. “It’s a labor of love.”

Cisneros, whose family is Mexican, has been involved with African and Afro-Caribbean drum and dance for 17 years. He has studied with drummers and dancers from Cuba, Haiti, West Africa and Brazil, and has taught in a variety of settings throughout the U.S., including teaching Spanish at public schools in Hawaii. Kessler, whose family is Israeli, grew up in Seattle and has a background working with multilingual families as an early-childhood educator and care provider.

The couple met in Hawaii a decade ago and moved back to Kessler’s hometown to start their family. Kessler didn’t really play music until she met Cisneros, but she has since developed a love for percussion, as has their son, Aviv, 7, who absorbed the constant music in their home and developed an interest early on.

“It’s part of who he is,” Kessler says. “He sings. He has drumsticks in both cars.”

Aviv takes formal drum lessons — not from Dad — and father and son love to jam together; they often have other musician friends join in. Practice is important for children who want to progress, Cisneros says, but if they really love it, it takes the pressure off. His parents hope Aviv’s musical interest continues, but his dad adds, “He can do whatever he wants.”

Drawing on their own cultural backgrounds, the couple shares songs and stories in English, Spanish and Hebrew at Baby Jam. Kessler uses a storyboard with felt animals and props she made to complement the music.

“We intentionally create stories and rhythm that keep the beat, because research has shown that really helps kids learn,” Cisneros says. “When I was teaching Spanish, I found that songs were the most effective way to help students learn the language.”

Parents seem to enjoy the class as much as the kids, which is the intention. As a mom and a professional nanny (her job when she’s not Baby Jamming), Kessler has been to plenty of music classes, and she wants to create a playful atmosphere that’s fun for all.

Julie Hubert of Ballard brings her 2-year-old son Jack to the class regularly. He spent most of a recent class happily spinning and dancing in the center of the room.

“He really responds to the rhythm and the music,” his mom says.

Two-year-old Xavier Thomas had his small hands on a drum throughout the class and raced up to the big drums at the end. It was his first time there but his mom, Angeline, says they’ll be back: “He just took to the drums, even before he could walk.”

When the class ends, parents try to round up their children, many of whom clearly aren’t ready to go.

“They don’t like to leave,” Kessler says with a smile. “It’s wonderful for us to be part of this growing community and see this appreciation for music.”