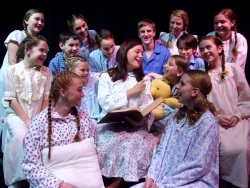 It's quite a trick to move The Sound of Music from the sweeping spaces possible in the movie to the square confines of a small stage, but the Heavier Than Air Family Theatre manages it with charm and energy.

A cast of about 40 adults and children – some playing multiple parts – move seamlessly from scene to scene while set pieces slide in and out, so that the show never (well, hardly ever) drags and there was always something new to look at.

Even though the performance is almost three hours long, including an intermission, the many children in the audience were totally enchanted and involved. It helps that they are able to sit on a platform in front of the regular theater seats so that they are right up by the action. My friend, Madison, who is 9, loved the show and didn't mind the length. We had a couple of 4-year-olds behind us; they sang along softly with many of the numbers, but did not come back for the second act. The theatre recommends the musical for children 6 and older, and that seems a good recommendation.

The singing is almost universally good, with energetic accompaniment from a talented three-person band. This musical is so accessible to children because of the von Trapp kids, all delightfully brought to life, especially the adorable and self-possessed littlest one, Gretl, played alternately by Ryen Glynn and Rainy Nelsen. Maria (Windy Autumn Foster), with her lovely voice, doesn't quite seem like the Maria we expect at first, but she grows on us. The only one who wasn't up to the others' standards was the overly nice Baroness Elsa Schraeder (Angelique Hefner), whose weaker voice did not project as well.

Seeing the movie first certainly isn't necessary because the plot is easy to follow in this expertly-done staging. The one disadvantage, as Madison attests, is that you might miss some parts that were in the movie. She "missed the part where the family hides behind the statues when the Nazis come." On the other hand, having the live characters so close gives the production an immediacy missing from the movie.

The scenes in the abbey and church are lovely, with a joyous spiritual quality. If you don't have a Catholic background, you might have to explain to children what nuns are and why they live in an abbey. Madison was curious about why they don't have children or get married.

The Nazi characters are slightly menacing, but there are no guns or overt threats. I don't think much explanation is necessary for smaller children – just that they were bad people who were taking over Austria and making everyone obey them, and Captain von Trapp and his family didn't want to do that. Older children can be given a bit more historical background, but I emphasized that the real von Trapp family did indeed escape and make music in freedom. "Those people were scary in real life, but not here," Madison observed of those with the black armbands.

As in the movie, this production of The Sound of Music ends with Captain von Trapp choking back tears up as he sings "Edelweiss," and with the biblical encouragement from Mother Abbess to the fleeing family. I teared up a little bit with them.

Where: The Heavier Than Air Family Theatre performs at the Green River Community College Performing Arts Building, 12401 S.E. 320th St., Auburn. (Drive onto campus at the 124th Street entrance, park and turn right to find the central courtyard and the theater; campus maps do not show the theater building.)

Next On the Schedule? The Phantom Tollbooth June 15 – 23.

Wenda Reed is a Bothell writer and theatre-goer. Madison Jones is a third grader at the Bear Creek School.