Most parents are old pros at planning birthday parties by the time their children coast into the upper reaches of elementary school. My fourth grader, for instance, is on the verge of her tenth birthday. Add in the annual celebrations for her younger sister and brother, 8 and 5, and my husband and I have planned 22 birthday parties. We have hosted barbecues and beach parties, scavenger hunts and sleepovers. We've welcomed a clown and a magical dress-up lady into our living room and a gymnastics school bus into our driveway.

We have stood nervously at the edge of a pool of splashing second graders, praying all would come out alive, and we've tried out all the gift options – tearing open 20 presents in five minutes flat, opening after the party to avoid that very un-Seattle display of childhood greed, having a game exchange instead of gifts. One night five years ago, I even gave birth just a few hours after the Tumble Bus pulled away.

Despite all this planning experience, there is a new factor this year. This time, our oldest daughter and her friends seem to be really, truly growing up. They are clamoring to ride in the front seat, for pierced ears, camisoles and their own cell phones. Mine hopes to be a camp counselor one day soon. She is old enough to be home alone for an hour, but – thankfully – she's not past writing down "magical powers" as number four on her Christmas list.

Parent educator Kathy Slattengren, founder of Seattle-based Priceless Parenting, describes the years from 10 to 13 as "the tween age, when they are separating from their parents and thinking, ‘I know what my mom and dad like, but what is it that I like?' They are very aware of what their friends are thinking and how they are perceived by other kids."

Penny Rose, an experienced educator and naturalist for Seattle's Discovery Park, said kids making the transition from elementary to middle school "are at the age when they are looking forward to being an adult, but no one views them as an adult. They want to make a difference and be acknowledged."

When it comes to birthday parties, this yearning for independence means that tween kids want to help decide what to do and whom to invite. The days of inviting the whole class have passed for most, making way for more intimate experiences. Slattengren advises setting a budget and letting your tween's personality and passions guide the planning.

"A child who is shyer probably doesn't want to go roller-skating with ten kids. Taking one close friend to the Great Wolf Lodge for a night might be a better choice," she said. "Or a kid who loves sports and has a lot of physical energy might want to organize a game of soccer or swimming."

Orca Middle Schooler Emma Maurisak, for instance, loves to draw and create. After seeing Tim Burton's fantastical movie Alice in Wonderland, she and her mother, Jill Maurisak, came up with the idea of inviting friends to come in costume for a Mad Hatter Tea Party.

With a budget of $100, the two started planning a month in advance. Using giant sheets of thick, colored paper from Party @ Display & Costume, the 12-year-old created a rabbit-hole entrance and a huge mural of the Cheshire Cat. She fashioned a cascading wall of translucent flowers from recycled plastic water bottles, fishing twine and bright spray paint. Her grandmother helped with the menu of tiny cream cheese-cucumber-mint, egg salad and tuna fish sandwiches, cupcakes and gumballs. Maurisak planned an outdoor scavenger hunt that ended in a boisterous Silly String fight.

"It was my best birthday ever," Emma said. "It was special because I could show everyone how talented I was in my art work and I had all my friends there."

Parents, of course, need to head into this parent-child party partnership with a clear idea of what they can handle. "You need to know what will make you comfortable and what will make [you] insane," said Slattengren.

Sleepovers, for instance, involve a huge time commitment and at least two meals for a crowd, but give your older kids more time to hang out and be themselves. Outside-the-home experiences may work better for kids seeking a unique adventure or families short on preparation time. Greater Seattle is rich in opportunities for boys and girls in this age group. Laser tag at Magnuson Arena Sports, an outdoor battle at Eastside Paintball in Monroe, a sporting event, a PG-13 movie, ceramics at Paint the Town in University Village, a scavenger hunt and picnic at one of the region's destination parks, or bowling at UW's Husky Union Building are all perfect choices for this age.

At its core, a birthday party is the chance to celebrate your special child with a few hours of shared joy. Even when they don't go perfectly, kids do hold on to them as memories of being loved. At a fundraiser last month for the Northwest Children's Fund, Diane Jordan, an 18-year-old foster child who spent much of her childhood on the streets of Seattle, brought a packed house to tears when she described how a counselor at her homeless shelter had surprised her with a party when she passed the GED.

"It was small party," she said, "but it meant a lot to me because no one had taken the time to throw a birthday party or anything for me in so many years."

Birthdays are a day in which we remember how lucky we are that we have our children, and that they have us. I remember a crisp fall day many years ago when my mother shooed me outside so she could to decorate for my tenth birthday, near Halloween. Sneaking onto the front porch, I caught a glimpse of the orange and black streamers and crepe paper balls crowding the ceiling and thought in wonderment, "This is for me!"

Heath Foster is a Seattle-based writer and mom of three.

Dancing at STRENGTHstudio and Dinner at Olympia Pizza & Spaghetti House
Former elementary school teacher and mother of three Susan Cotter's love of dance is contagious in the 90-minute parties she offers at her sunny, mirrored Capitol Hill studio. She teaches acceptance of each other's dance styles and the dance moves for Calypso, Hip Hop, pop songs and Michael Jackson's Thriller video. "They are always so proud to show off how quickly they have learned the steps," Cotter said. "Before they know it, they have had an hour-and-a-half cardio session using their muscles, bodies and brains." Parents are invited for a ten-minute performance at the end and can bring their video cameras along. The party cost is $150 for 12 kids. Belly dancing scarves are available as favors.
STRENGTHstudio, 526 19th Ave. E., Seattle; 206-300-0709. http://allthestrengthyouneed@yahoo.com. Olympia Pizza & Spaghetti House, 516 15th Ave. E., Seattle; 206-329-4500. http://olympiapizza3.com.

Bounce off the Walls at Sky High Sports in Bellevue
The biggest complaint from parents who have hosted the two-hour birthday parties at Sky High is that they could not convince the kids to stop jumping to break for cake. The walls and floor are trampolines here, and the foam pit is irresistible. Manager Vedran Djakovic said third to sixth graders get a kick out of playing airborne dodge ball, with the "Air Attack" or "Bounce-Twist and Dodge" versions to choose from. Private trampoline courts are available for rental, or you can use the regular courts for $11 an hour per child; or for $250, you can purchase the two-hour weekend birthday package, which includes jumping time for up to ten kids along with a slice of pizza and water for every child. Bring a liability waiver for every child and your own cake.
Sky High Sports, 1445 120th Ave. N.E., Bellevue; 425-990-5867. http://sea.jumpskyhigh.com.

Hike and Picnic in Discovery Park
Five miles northwest of downtown Seattle, this 534-acre former military fort on Magnolia Bluff has breathtaking views of Puget Sound and a saltwater beach with 300-foot cliffs and teeming tide pools. For 10- to 13-year-olds, park naturalist Penny Rose suggests parking at the south parking lot and hiking the Loop Trail through the forest and meadows to South Beach, which has some the lowest tides of the year during the summer. One adult can drive a picnic and cake down to meet the hikers for a scavenger hunt on the beach, keeping in mind not to disturb the sea life. Rose said tweens can help by taking a bag along to collect some of the plastics and other trash washed up on the beach.

Another great option is the half-mile Wolf Tree Nature trail, which is short but full of biodiversity. Entrance to the park is free, detailed park maps are available at the visitor center for $1, and birding kits containing bird lists and binoculars are available to borrow.

Summer low tide charts are available at http://www.seattleaquarium.org. A great favor for this party would be the plastic-coated Pocket Naturalist's Guide to Washington animal or bird life available at Barnes & Noble for $5.95.
Discovery Park, 3801 W. Government Way, Seattle; 206-386–4236. http://www.discoverypark.org. 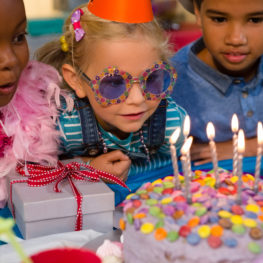