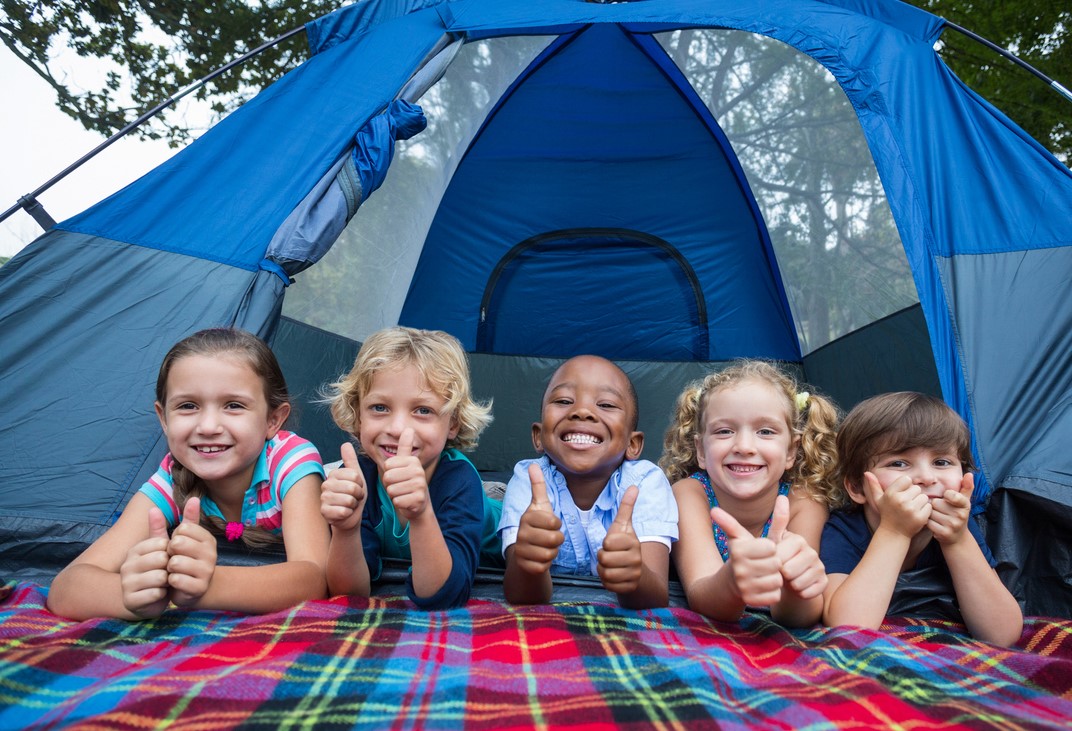 (In the meantime: Camping has been extended through Nov. 1, 2020, at many state parks)

When it comes to campgrounds, Washington state parks reward those who plan. Reservations at these parks open nine months out, so if you want your pick of parks and spaces, you need to start planning for next summer while most of this summer’s leaves are still green, and the new school year’s pencils are still sharp.

Other systems have different timeframes: for reservable sites in national forests and national parks, it’s six months, and for San Juan County parks, it is 90 days. (In the past, Oregon State Parks used to have reservations 9 months in advance, but since reopening after the COVID-19 lockdown has only allowed reservations 30 days in advance.)

But now we need to turn our attention to Washington state parks. Summer is nine months away, and you could theoretically go anywhere. If all campgrounds are available for family vacations, which ones do you choose?  Here are 10 dreamy options. All have good facilities and most are in big, fascinating parks.  Your family could stay here all of a long weekend, and never run out of things to do. But if for some reason you don’t manage to snag a reservation at your first choice, don’t fret. The Pacific Northwest is full of glorious places to camp. You don’t have to plan months in advance to have a great trip. And if you’re looking for information on state parks, there’s a guidebook.

Here are our suggestions for campgrounds. We listed them in order of the driving time to get between there and Seattle. Because of the nature of Seattle traffic on summer Friday afternoons, it will likely take longer if that is when you are leaving.

Washington’s most visited state park has miles of salt water shoreline, beautiful forests, including a large stand of old growth, and tranquil freshwater lakes. Then there’s Deception Pass itself, a narrow waterway between Whidbey and Fidalgo islands with ferocious tides that create whirlpools and standing waves. A gracefully curved pair of bridges carry people 180 feet above the churning water. Drawback: Once in a while, you might be wakened by “the sound of freedom,” or more specifically, the sound of jets from Naval Air Station Whidbey Island.

Booked up? On Whidbey Island, Fort Ebey and Fort Casey state parks both have lovely camping and access to spectacular beaches. If those are full, try Larrabee State Park near Bellingham.

Tucked into the side of Carr inlet, in the part of South Puget Sound where the inlets, islands and peninsulas swirl around each other in a fingerprint pattern, this park offers calm waters, forested trails, and a beach that expands to a teeming mudflat at low tide.

It’s a great launching point to explore the spectacular Leavenworth area (the peaks! the larches! the lederhosen!), but your family could also have an action-packed weekend staying within the park boundary. The lake has a sandy beach and a great swimming beach for kids, and there are trails for hiking and biking.

Booked up? If you want to explore the Leavenworth area, Wenatchee Confluence State Park is another option. You can also make reservations six months before your arrival date at the Eightmile Campground in Okanogan-Wenatchee national forest. The national forest also has an array of first-come first served campgrounds in the area. If you don’t need to be in the Leavenworth area and are looking for a woodsy lakeside retreat, try Millersylvania State Park, or Silver Lake Park, a Whatcom County run facility that opens its reservations three months in advance.

The park has a spectacular location, where the Wenatchee River flows into the Columbia, and has a setup that mixes natural areas with serious recreation. The trail system connects to a bridge over the Wenatchee River that leads you to the Horan Natural Area, a teeming wetland preserve, as well as the 10 mile Apple Capitol Recreation Loop trail, which can convey cyclists along the scenic banks of the Columbia. Swimmers and boaters enjoy the river, and the park also has playfields. So if you were thinking of getting away for a weekend with some families connected with your daughter’s soccer team, this would be a good choice. If you get around to leaving the park, great hiking in the Leavenworth area is a half-hour drive away.

Located at the tip of Marrowstone Island, near Port Townsend, this park is a great place to spend a long weekend. There are more than three miles of shoreline with beautiful beaches, tide flats loaded with clams, uplands with big trees, an amazing collection of buildings and bunkers dating from its time as a military base defending Seattle, a museum, and wide areas to fly a kite and fly a frisbee. There are two main campgrounds. The one that gets booked up first is in a sunny meadow between two beaches. I, for one, prefer the second one, set amid big Douglas firs on a bluff with a nice sunset view of the Olympic Mountains.

Booked up? Try Fort Worden Historical State Park, or Dungeness Recreation Area, which is run by Clallam County. Reservations for 2021 at Dungeness are available starting Jan. 1.

This is one of the busiest campgrounds in the state, and many of those who come here are repeat visitors. Some have been coming for decades. A good part of the attraction is the setting. Washington’s largest natural lake, and the third deepest lake in the U.S.A., Chelan is full of turquoise-green water surrounded by high mountains, and the tent spots at this campground are set up to take in astonishing views. There’s a swimming beach and lots of activity on the water. Boat rentals are available nearby, and it’s prime hiking territory.

Booked up? Try Twenty-Five Mile Creek State Park, or maybe the City of Chelan’s Lakeshore RV Park, which has tent spaces as well as RV hookups, and, in the beforetimes, allowed reservations for both nine months in advance. It canceled all tent-only reservations in 2020, and is not allowing tent-only camping until further notice, but perhaps things will change.

Spend a weekend on Lopez Island, camped by an endless beach. There’s a booth with kayaks, standup paddle boards and bikes for rent, to aid you in your exploration of Lopez Island. Lopez is as close to flat as the San Juan Islands get, and if your family is up for biking on winding country roads, bring bikes. If you’re up for it, this is an easy place to try bike-camping. It’s a short ride from the ferry.

Set where the Columbia River meets the Pacific, Cape Disappointment has surf, dunes, forests, wetlands, rocks, trails, the ruins of old bunkers, and a wonderful museum, with nicely designed interpretive activities for the kids (for example, a challenge to pack canoes as heavily as the Lewis and Clark expedition did) and enough detail to satisfy the most studious adult. You can spend a long weekend here and still have plenty left to see.

During the last ice age, an ice dam formed, creating an immense lake, until the dam broke, sending water and ice tumbling over the landscape, scouring out channels, and forming tall cliffs where it couldn’t go through bedrock. This happened again and again, forming what we now call the channeled scablands, an area of towering cliffs, high plateaus, deep coulees and desert stars. Steamboat Rock is in the heart of this country. The rock itself, a 650-foot tall plateau with high basalt walls, looms over the lakeside campgrounds. It’s a quick, hard scramble to the top, where you have wide views, and can watch hawks and ravens from above. After you get hot and dusty hiking, it’s time to pump up the giant rainbow pega-corn floatie, pick up the water guns, and cool off in Banks Lake.

Booked up? Try Sun Lakes-Dry Falls State Park, or, if that is full, try Spring Canyon, in Lake Roosevelt National Recreation Area. You can make reservations there six months in advance.

After a scenic ferry ride through the San Juan islands, you drive over hills and around a big bay until you come to a forested refuge. Moran State Park, the fifth biggest of Washington’s State Parks, is largely covered with Douglas Fir forest, some of it old growth. It has five camping areas, situated around two of the five freshwater lakes within the  park boundaries. Quite a few of these sites are right by the lake. There are many hikes to be had here, the most epic of which is to the summit of Mount Constitution, the highest point in the San Juans, also within the park boundaries. (If you’d rather not hike, there’s a road there too.) Atop Mount Constitution, you have a 360-degree view, taking in most of the island-dotted inland waters called the Salish sea. 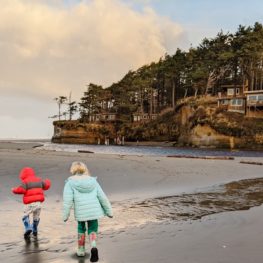 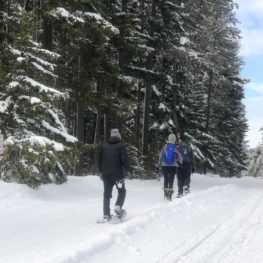 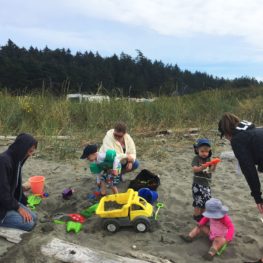