With three actors, a few puppets and a relatively monochromatic color scheme, Seattle Children's Theatre has another hit on their hands with their opening play of the 2011-2012 season. Harold and the Purple Crayon opens with Harold and his crayon, of course, and you are drawn (pun intended) into his world as he discovers the magic of his imagination.

Twelve "purple crayons" are used throughout the production to create different drawings using lasers, light and ink. Big kudos should go to the production team that is as crucial to this play as the actors. They work in tandem with Harold to "draw" his creations and make them come alive remotely. And even on opening night, the timing between Don Darryl Rivera (Harold) and the many layers of technology was in sync, which made it easy to fall into the magic of the moment.

Several different types of puppetry are used, which keeps things fresh and fun. A large malnourished moose and prickly porcupine tickles the audience's funny bones, as do the tiny aliens on Harold's trip to the moon. Shadow stick puppets and an ingenious puffer fish save Harold under the ocean and he in turn helps a Chinese-type dragon puppet find his smile. Plush remote-controlled critters roam the forest, and the purple crayon creates animation that comes alive on fabric and walls.

Throw in original songs, a light show and a little dancing and you have the recipe for an enthralling afternoon or evening at Seattle Children's Theatre. The show runs 90 minutes including the intermission, and snacks are available in the lobby before the show and during the break (tip: if you get to the theater a little early, get your treats before the show to avoid the line at intermission). I took my very wiggly, almost 5-year-old son to the 7 p.m. performance with the idea that we could go to the cry room if he couldn't sit still, but we never had to leave our seats.

Thank you SCT for an engaging and extremely creative performance! 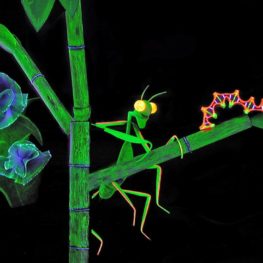