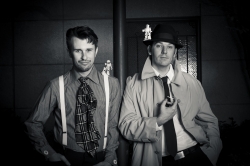 You're not a robot? Well, what are you? You best be prepared with an answer because you just might get asked that question during the performance of Number 2 Quebecois Robot Detective Agency. This zany world-premiere play is the brainchild of Jonah Von Spreecken and Ali el-Gasseir, who also act in the show. One part dance comedy, one part action adventure, and one part dramatic story make for one completely genius concept and show at Washington Ensemble Theatre.

The scene is Montreal, and two robot detectives are hot on the trail of a thief. Their relationship is tenuous as one robot is jealous of the other – a newer, sleeker model. However, fancy parts and long-life batteries cannot replace good old-fashioned determination. The number two robot detective learns creative ways to use his shortcomings as strengths and never gives up. In the end, his perseverance is rewarded and all the clues come together to solve the mystery.

The story is both amazingly intricate with its clues and splendidly simple with its resolution. Children as young as 5 will be able to follow it easily and perhaps figure out the clues themselves. Even younger kids can enjoy the humor and physical comedy of the show. Just like Dora on Saturday morning cartoons, kids will leave this show with a smattering of French words added to their vocabulary, too.

My 8-year-old daughter was delighted to be the one chosen to answer the audience question and loved how they incorporated her answer into the story. She was amazed that two people could put on an entire show.

For me, there was something nostalgic and beautifully child-like about the play. Using colored cardboard boxes and manipulating them in various ways for the props is like a page out of the rainy day parenting guide. Close inspection of the robot costumes revealed "found" items used in creative ways, just like my daughter does when she plays. The big reveal at the end of the show was probably my favorite part. The robots weren't robots at all but really just brothers playing with moving boxes, nervous and a little scared about their big family move.

The show is a wonderful mix of dramatic entertainment with the best of dramatic education. Using play as a way to talk about difficult and scary things is something we don't do often enough. Even without an underlying reason, drama just for the fun of it is a wonderful thing. The show is a celebration of imagination; an instructional guide for how to play with people and your surroundings and not just toys. Imagination is a muscle that has to be used to grow. I hope this play will serve as inspiration for adults and children alike to flex their imaginations in new ways.

The theater is a tiny little thing in Seattle's Capitol Hill neighborhood. The lobby is small, so don't arrive too soon, and all parking is on the street. The seats are general admission, but there are no bad seats in the house. The entrance to the theater is a single door in the middle of the block just down from a coffee shop. If you blink, you might miss it. And that would be a terrible shame as this show is a real treat. For we all know that when it comes to creative play, the box is the best part.

Kelly Rogers Flynt is a freelance writer based out of Lake Forest Park.  Her children have been playing in cardboard boxes for 8 and 11 years.