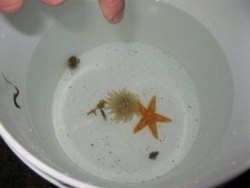 My two girls, ages 4 and 7, love exploring tide pools and gazing at sea creatures at the aquarium. So going to a Pier Peer, a nighttime look into the waters of Puget Sound, immediately struck me as a fun family outing. I invited along some friends who have two boys, ages 3 and 7, and we all headed over to a marina in Magnolia to see what the dark waters would reveal.

Pier Peers are put on by People for Puget Sound, an education and advocacy group, to show people why we need a clean and healthy Sound. The one staffer on hand was helped out by a corps of great volunteers.

They had three stations set up on different parts of the pier, each with a small but powerful light hanging a foot or two into the water to illuminate the sea life below. At the first station the older kids immediately went down on their bellies to get a closer look over the edge of the pier. All of the kids in our group were taken by the feather duster worms, which looked like pompoms of feathers attached to a foot-long tube. The moment a finger came near the "feather" tops, the worms pulled them in, leaving only the hose-like tube visible. One of the volunteer naturalists told me, "I think this is where Dr. Seuss got his inspiration." Indeed, the tube worms did look a bit like little Truffula trees.

There were nets and small buckets on hand for kids to dip in the water, and each station had a couple of 5-gallon buckets for showing off the unusual creatures that showed up. One had a graceful Dungeness crab, another a wee starfish.

The standout volunteer for us was Nicole Killebrew, whose day job is as an interpretation supervisor and diver at the Seattle Aquarium. Killebrew managed to make searching under the pier for a worm or two sound incredibly exciting. She helped the 3-year-old in our crew dip a bucket into the water over and over again in search of any small sea creature. With the older kids, she explained in simple question-and-answer terms the role the "feathers" on the tube worms play to collect the zooplankton they live on.

A word of caution about expectations: I somehow imagined a huge light being flung far out into the water and large sea creatures of all varieties rising to the surface. Unfortunately, I managed to pass that overblown vision on to my kids. In fact, the Pier Peers are far more like gazing into a tide pool. If you look carefully and poke around a little, you're sure to be rewarded by spotting some quick-moving crabs or Seussian sponges.

The Pier Peers take place at night, so after 45 minutes or so, we were all ready to head back up for a cup of hot chocolate and quick trip home to our warm beds. The chance to see the life down in the water was a short and lovely excursion that gave us a glimpse at the complex living world just below the surface of the Sound.

When: Pier Peers are held once a month.

Cost: Free, but registration is required and the events sometimes fill up. Go to http://pugetsound.org/forms/event_rsvp to register.

Ruth Schubert is the Managing Editor of Seattle’s Child and the mother of two enthusiastic explorers. 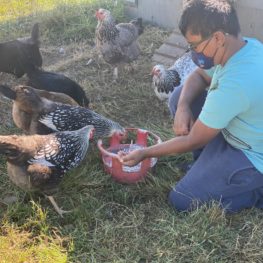 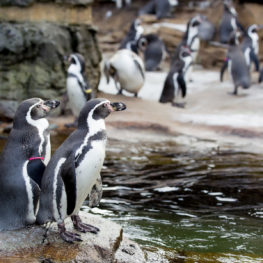 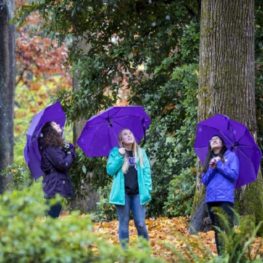