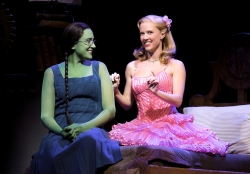 But there's no yellow brick road and no Kansas in this Broadway blockbuster set in the Land of Oz. For the uninitiated, Wicked is far from a replica of the classic movie. It's the story behind the unlikely friendship between the "good" witch, Glinda, and the "wicked" (really just misunderstood) witch, Elphaba. And, as befits the Broadway musical, it's got loads of amazing costumes, sets, songs and dancing – all set in the splendor of the Paramount Theatre.

Glinda and Elphaba are thrown together as roommates at boarding school. Glinda is the golden girl – popular, ambitious and beloved. Elphaba, with emerald green skin, is whip-smart, fiery, idealistic and shunned. The two become unlikely friends (my daughter guffawed with glee as Glinda tries to teach Elphaba how to be popular by perfecting the hair-toss and other moves). My daughter and I also had some good discussions the next day around some of the show's themes, such as what people see on the surface and what people are really like underneath.

Children under 4 are not permitted to Wicked; the recommended age is 8 and older. And I can see why. Several jokes went right over my almost 10-year-old daughter's head (note that this didn't diminish her enjoyment of the show one iota). There are some adult themes (i.e. Elphaba's mother carousing with men); dark themes (Oz becoming a sort of police state and animals being caged and stripped of their ability to talk); and a few romantic scenes with kissing (eye-rolling by my daughter with those). A dragon with a gargantuan wingspan is mounted on the stage front, with blazing red eyes, snorting smoke as the curtain rises. My daughter was a bit freaked out by an early scene that shows Elphaba being born; the nurse holding up an emerald green baby in horror. Ditto with the flying monkeys (I think the movie version is scarier) and the giant golden Wizard of Oz head with its booming voice and flashing eyes.

That said, my daughter especially enjoyed the dance-heavy number "One Short Day" when Glinda and Elphaba visit the Emerald City together and get caught up in the rush of the bustling, all-in-green town (Elphaba finally feels at home because her emerald green skin doesn't stand out). She giggled throughout "Popular" as Glinda schools Elphaba in the art of popularity. And her eyes were wide as saucers in "Defying Gravity" as Elphaba is raised into the air and seems to be flying over the entire stage.

If you get a chance to see Wicked, give yourself plenty of time to get to the Paramount. On opening night, sidewalks were packed and traffic slowed to a crawl. The $25 lot across the street was full (fear not, the lot on 7th Avenue and Pike Street had plenty of room and was a veritable bargain with an $8 flat rate for the evening show).

I recommend you do yourself a favor and pre-order your intermission snack (our favorite treat was the Tom Douglas coconut cream pie slice for $7); otherwise you'll never make it to and from the bathroom in time. Just getting to the bathroom takes some maneuvering with a full house. If you want Wicked "merch," shop before the show (doors open one hour before show time). For $25 you can have a photo of you and your crew superimposed on the stage during an all-in-green scene from the Emerald City. "It's your only chance to get on Broadway without an audition," quipped the young woman running the photo stand.

The show runs two hours and 45 minutes with one 15-minute intermission. Expect to wait quite a while for the parking garages to empty out, too.

A day-of-performance lottery for a limited number of orchestra seats will be held two-and-a-half hours prior to each performance. You have to show up in person at the box office with valid photo ID to enter the lottery. Winners can purchase up to two $25 orchestra seat tickets for that day's show.

Lynn Schnaiberg is a freelance writer in Seattle and author of Outside magazine’s Urban Adventure Guide to Chicago.