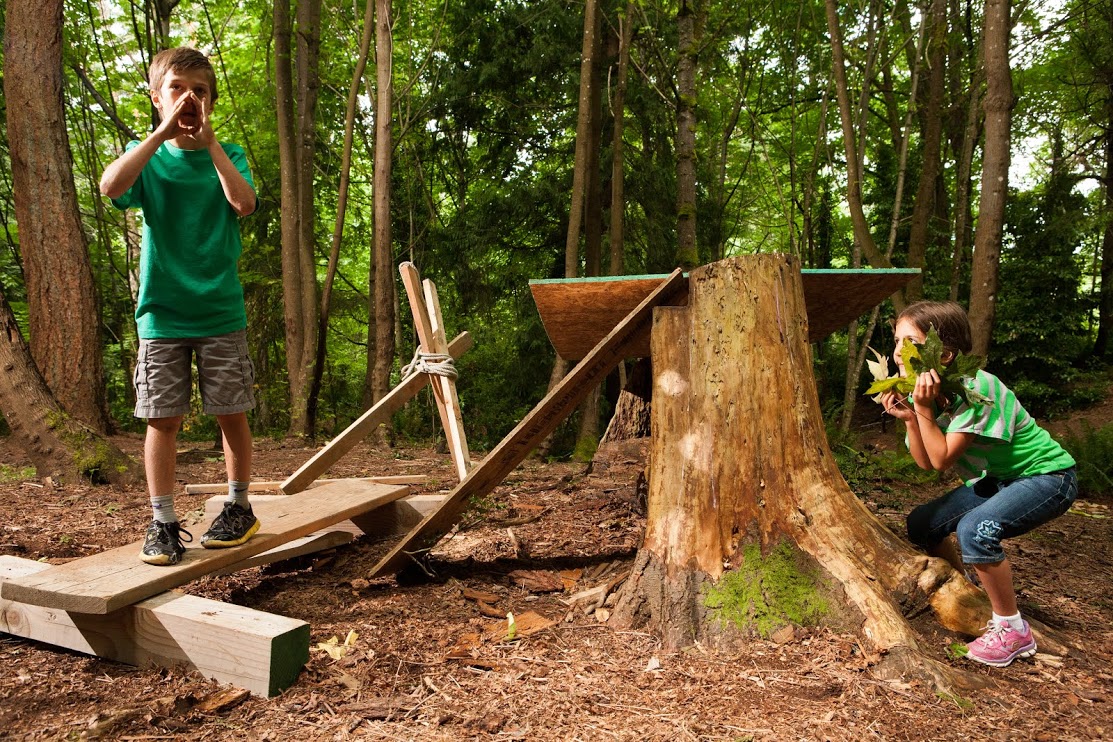 Update, 2019: Sadly the program will not operate this year because of budget cuts. However, there will be a summer camp program.

Adventure Playground on Mercer Island is a one-of-a-kind park. Kids check out a toolbox, load up on assorted pieces of lumber and start building.  It will be open June 26 to  Sept. 30  in 2018, 1-4 p.m. Tuesdays, Thursdays and Sundays through the end of August; Sundays only in September (but not Sept. 2).

The playground, which covers two acres within Deane’s Children’s Park, is part of movement to create safe places where kids can participate in potentially dangerous activities and let their creativity run wild. It’s in line with books such as The Dangerous Book for Boys, The Daring Book for Girls and 50 Dangerous Things (you should let your children do) that encourage kids to build, experiment and test boundaries, with guidelines aiming to keep them safe.

When you run a park where kids can use hammers, nails and junior hacksaws, some injuries are to be expected. But in the case of Mercer Island’s Adventure Playground, the wounded have mostly been grownups.

“The kids, since they haven’t done [woodworking] before, they’re super careful,” says Amber Britton, parks and recreation coordinator for the playground. Instead it’s the overconfident parents whacking their thumb with a hammer.

“Sometimes the parents are little nervous and hover over their kids and try to micromanage,” Britton says. “But once they get the kids going, 99 percent of the time they step back and are impressed with what their kids can do.”

The kids are transformed as well.

“We’ve seen kids’ confidence increase tenfold,” Britton says, when they pick up a hammer and “build this creation.”

Kids construct all variety of treehouses and forts, sometimes outfitting them with doors, tables and chairs. The kid-crafted shantytown grows all summer, then is disassembled when the playground closes in fall.

The number of kid-related injuries has been small, Britton said. The biggest problem is kids wearing soft-soled shoes and getting poked by nails. Staff comb the park with magnets designed to nab errant nails, but they miss some.

The park has gotten so popular, one summer there were wait lists to get in and wood supplies ran short.

“It is a huge hit,” Britton says. “This year, we’ve had other cities and other organizations calling to get information on it for starting their own. The concepts are growing.”

Before going to the playground, it's a good idea to call first to be sure it has not been closed temporarily due to inclement weather or any other reason. Call 206-275-7609. The playground is popular and they limit the number of kids allowed, so come prepared to wait to get in.

On the first visit you'll be asked to sign a child participation waiver which will cover the entire summer.

The park is available for party rentals.

What's Dangerous for Our Families and Why We Don't Know

Parenting and Risk: Why I Decided to Let My Kid Climb Trees