Long before Beth had two boys running around the house, there was Pocket the dog. Beth and her husband adopted the gentle Australian labradoodle in 2009 when he was a little over 2 years old. They took him to dog parks, brought him along on beach vacations, and cuddled with him at night.

“I know people say this about having a second kid,” says Beth. “But when I was pregnant for the first time, it was hard to imagine I could love another baby as much as I loved Pocket.”

Two kids later, Beth knows she has more than enough love to go around, but Pocket still holds a special place in her heart. She’ll always be grateful for how Pocket refused to leave her side while she recovered from cancer surgery 17 weeks into her first pregnancy.

“It was a difficult time, and he took such good emotional care of me,” says Beth.

Pocket has watched over her sons since day one. He slept next to their cribs when they were babies and follows them closely outside, even off-leash. His enthusiasm for the children knows no bounds.

“The most exciting part of his day is taking the boys to school in the morning,” says Beth.

Once the kids are out of the house, Pocket enjoys frolicking with the next-door neighbor’s elderly golden retriever, Tashi. Beth built a special gate in the fence so the best dog friends could go back and forth between yards and houses.

Pocket is holding up well in his golden years. His eyesight is failing, but for an old dog, he hasn’t stopped trying to learn new tricks. He’s active, always trying to keep up with the family on their many outdoor adventures. “His vet always looks down at his chart and says, ‘Nobody told you you were a senior citizen!’”

To learn more about this sweet dog, follow Pocket on Instagram @pocket.and.co, and his family’s outdoor adventures @seasalt.and.evergreens.

More winning pets: For the love of (bearded) lizards |  At the shelter just to look? Ha!

And more on pets and the people who love them: Does your family have what it takes to raise a guide dog puppy? | Not sure you're ready for a pet? Try one out! Here's how 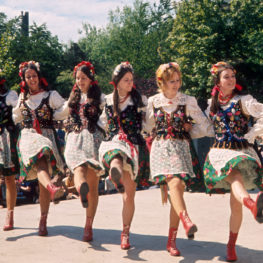