For Jason Mathews and his two sons, Nick, 10, and Linus, 8, a fresh start was in the cards in April 2015, when the trio downsized from a 1,900-square-foot home in Ballard to an 800-square-foot apartment in Magnolia. After Jason’s separation from the boys’ other father, the family packed up and moved to smaller digs, where Nick and Linus share a room with bunk beds and just enough room for a killer Lego table.

Jason, an interior designer and stager for The Enhanced Home, is no stranger to designing beautiful and functional layouts for smaller spaces. After moving in, he set to work creating a welcoming home by painting the walls a neutral tan, and the doors and trim a bright kelly green. “It was amazing how it made a small space feel so much bigger,” says Jason. “Painting all the doors green was something I always wanted to do, and it was the perfect opportunity to try it.”

Another added bonus to the smaller space was the opportunity to create an outdoor space for the family to eat, play catch and relax together. The yard had been neglected and was overgrown with weeds, with mangled dead grass and a tiny patio. With a little help from some friends, the boys leveled the yard and added new sod, planted purple and white flowers, painted the patio red and added a birdbath. They also doubled the size of the patio to make room for a table, five chairs and a grill.

While splitting time between two homes is no easy feat for kids, the family has made it work. “At first, I think they were more worried about why their two dads were separating,” says Jason. “But we worked really hard on keeping a good relationship and doing things as a family. When the boys are here, most of my time is focused on them. Having a bigger house and a bigger yard took more attention away from them.”

In terms of space, comic books have found a home right next to cookbooks and Harry Potter novels, as well as hidden nooks for toys and games (Linus is a master checkers player) to keep the space looking streamlined and inspiring for Jason, whose home office and boys’ homework center is the reclaimed barn-wood kitchen table.

Although the boys no longer have as much room to tackle each other during Seahawks games and the three have had to learn to share one tiny bathroom, the benefits outweigh the negatives. “I think sharing a room has made them closer,” Jason explains. “Even though it's a small space, everybody has room to hang out. We have a lot of friends over.” 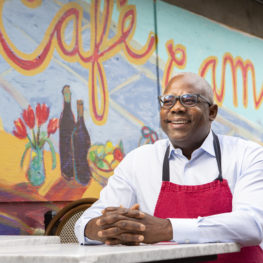 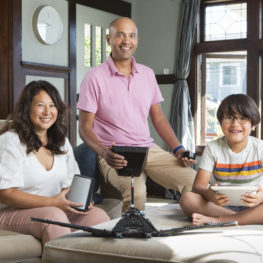