The path to encouraging healthy eating and reducing obesity rates among children begins with letting a worm wriggle up your arm, learning that slugs have teeth on their tongues, singing "Dirt, you made my lunch."

It continues with picking sweet, sun-warmed strawberries, blueberries and blackberries straight from the plants, nibbling unfamiliar leaves like stevia and sorrel, asking where more strawberry plants come from and why cabbage leaves have a white coating on them, and how you can tell when a worm is pregnant.

Children make these discoveries during garden tours, camps and classes led by Seattle Tilth at the Rainier Beach Learning Garden, the Rainier Beach Urban Farm and Wetlands and the organization's other regional gardens in North Seattle, Issaquah and Woodinville. "The kids see where food comes from; there's an immediate connection," says Becca Fong, food and farms program director for Seattle Tilth.

Rainier Beach is one focus for Seattle Tilth's efforts. Located in one of the country's most diverse zip codes (98118), it has a higher than average number of lower-income households, who often have less access to healthy food.

On a recent morning, 2- and 3-year-olds are getting a first introduction to gardening by creating bouquets of natural flowers and drinking mildly sweet "tea" made from steeping mint, oregano and thyme in water in the sun.

Their banana peels from snack time go into a big wooden worm bin where Tilth children's garden educator, Joanna Stodden, points out worms and other creatures living in the layers of food scraps and old paper. "We cover them up so the critters can go back to bed," she tells them. Then she lays out a tarp with aged compost on it and lets the children hunt for bugs. Some are squeamish; others let worms and sow bugs crawl all over their hands and arms. Stodden finds worm egg cases and tiny white baby worms and pregnant ones with a band around them. She tells the children how slugs eat food by passing it over their tooth-encrusted tongues.

The garden is a resource for kids of all ages. Students at South Shore K-8 School and from the KidsCo. summer and after-school programs come to the garden year round. They are involved in all the steps, from composting and preparing soil, to planting and harvesting, cooking and eating. "Some kids have been coming here three years, and they know exactly what to do when they come into the garden," Fong notes. Stodden works with teachers at South Shore and nearby Rainier Beach High School to incorporate the garden work into lessons. Students from the alternative South Lake High School "learn about caring for each other from caring for nature," Fong says.

"The learning garden is an entry point, and then kids can extend the experience to a larger base when they visit the Rainier Beach Urban Farm and Wetlands," Fong notes.

The urban garden is located on 10 acres previously used as a parks department nursery between Beer Sheva Park and Pritchard Beach. Seattle Tilth and the Friends of Rainier Beach Urban Farm and Wetlands began jointly operating the site four years ago and have big plans for a classroom, farm stand, improved greenhouses, wetland restoration, a new entrance and a connection to the park. Already its greenhouses and beds are overflowing with tightly planted rows of dozens of kinds of vegetables, bordered by fruits and a chicken coop. Grocery bags of produce from the garden go to parents and staff at a local child care center, and more food goes to local community kitchens and the Columbia City Farmers Market.

On a recent afternoon, a dozen 8- to 11-year-olds from KidsCo. walk over for an Earth Steward Garden Tour. They enthusiastically try stevia and sorrel leaves, which some stuff into their mouths in bunches and others find too sour. "Remember to hold the plant with one hand and pick with the other," Stodden says.

Sun-warmed strawberries are a big hit. "How do you grow more of these?" one boy asks, and Fong shows him how runners grow from the main plant and put down roots in a new place "like a space pod landing." Blueberries from 15-year-old bushes are another great find; some children aren't sure if the whole berry is OK to eat, never having picked them before. They throw blueberries to the 20 chickens – all ladies – jumping back when the chickens reach up for them. Stodden tells them how the chickens take dust baths and how they lay their eggs in blue boxes.

As they pick berries, one of the girls wonders why people buy them in the store when they can be found on the vines, and another notices that fruit in the store is usually "harder and more sour" than fruit you pick fresh.

As Stodden finishes the tour with another hands-on exploration of critters in the compost, she invites the kids to "come back with your adults." The kids are enthusiastic. "I'm coming back, and I'm bringing my grandma," one girl says.

Editor's note: This article was originally published in September of 2013. 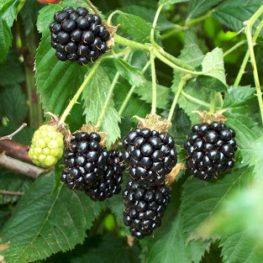 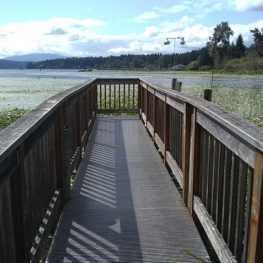