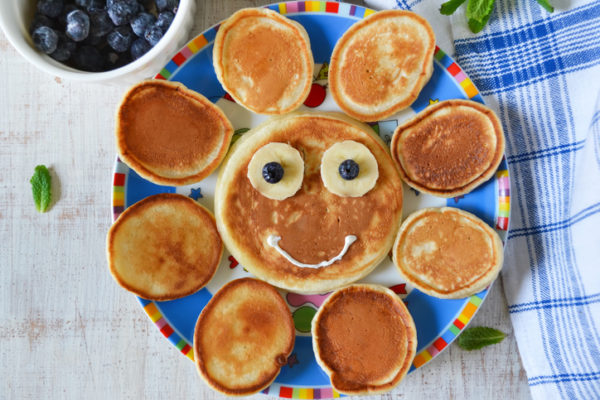 Weekend mornings at my house started much the same as many others in the 1980’s. My dad would wake up early and brew a pot of coffee while whipping up a batch of pancakes. He was the designated breakfast maker in our house and we loved his meals.

When we moved from Texas to Seattle in 1986 and found some of our old staples weren’t sold here, we got worried. That is, until we discovered Krusteaz and fell in love. 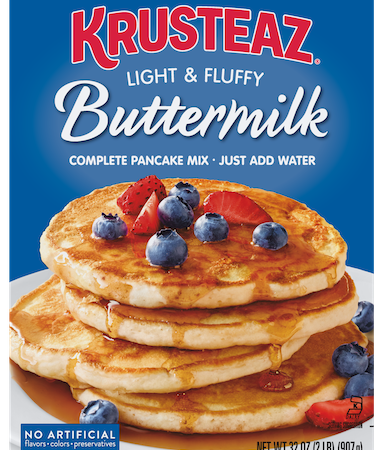 Here was a boxed mix that always led to fluffy pancakes and waffles with a delightful crisp. Weekend breakfasts were saved!

As the designated meal maker in my house all these years later, I still love this hometown favorite and rely on Krusteaz for perfect pancakes or waffles.

This year marks the Krusteaz brand’s 90th year on family tables across the nation. In celebration of this milestone, parent company Continental Mills recently changed its name to The Krusteaz Company. The Tukwila-based business also owns several other brands, including WildRoots® trail mixes and Kretschmer® Wheat Germ.

“We say that Krusteaz is ‘by makers for makers’ and our 800-plus employees are makers, rooted in a spirit of fierce pride,” says Andy Heily, president and CEO of The Krusteaz Company. 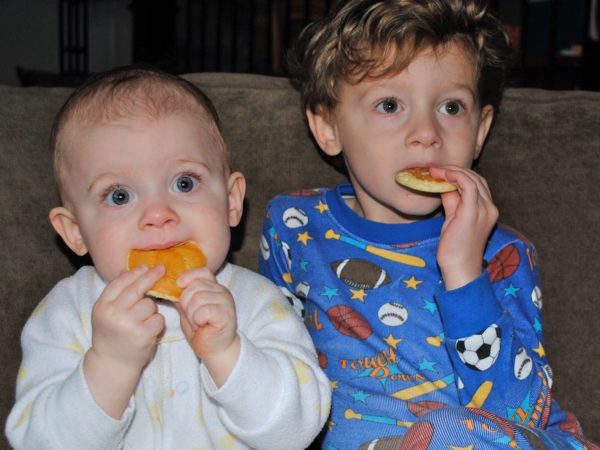 The pie crust that started it all

During the Depression, Seattle teacher Rose Gilbreath Charters launched Krusteaz with her instant pie crust and sold it from her kitchen to neighbors and local restaurants. Demand soon exceeded her kitchen’s capacity, and Rose and her husband James founded their company, Continental Mills, in 1932. What started with an instant pie crust soon expanded to include pastry flour, biscuit mix, doughnuts and eventually its signature buttermilk pancake mix. The product line continues to grow  – today Krusteaz offers gluten-free, high-protein and whole-grain mixes and more.

“Krusteaz Pancake Mix was the first just-add-water pancake mix in the country,” Heily points out. “[It was] created in the 1940s and developed with the University of Washington Home Economics Department. At the time the mix hit the shelves, most people didn’t even have a TV.”

What’s in a name?

Heily says creative thinking has sparked the company from the start – beginning with that first pie crust’s name.

“Rose called her product Krusteaz pie crust, cleverly combining ‘crust’ and ‘ease,’”says Heily. “Since then, ingenuity and innovation have been baked into our DNA.”

Krusteaz started in the Charters’ family kitchen and continues to be family-run to this day. John Heily joined Krusteaz as president in the early 1940s and helped diversify the product line. Today the Heily family remains at the helm. 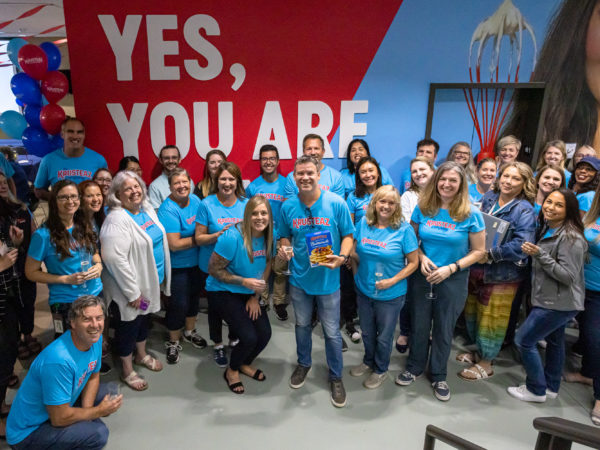 Andy Heily says family is important to the company — not only the Heily family who continue to operate Krusteaz, but the company’s family of employees.

“We are lucky to be here in the Seattle area,” said Heily. “Many of our employees have been with us for over 20 years and we even have several current employees who are second- or third-generation just like me.”

Heily’s daughter is one of the future generations looking forward to helping ensure Krusteaz remains a household name. Heily did not want her name used in this article, but the 11-year-old recently completed an immersive product development project as an intern with the company’s research and development and creative services departments.

“The people were really nice and really fun. We made the best product ever, if I do say so myself,” she reported. “It was a Cheesecake Muffin. [It] had a graham cracker base, so we described it as the Grahamy Award Winning Cheesecake Muffin.

“We had a lot of fun designing the package, and it ended up looking great,” the girl added. 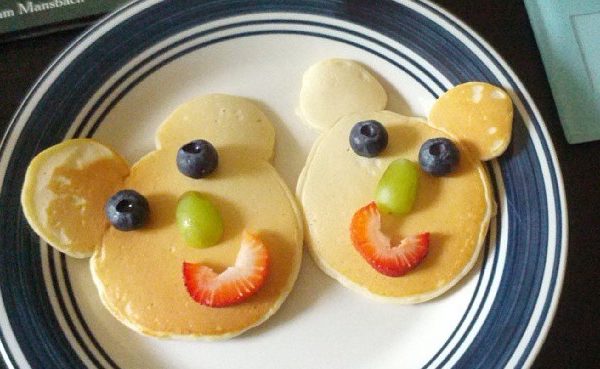 A delight of childhood, the mouse pancake. Photo by davew1270/flickr.

Heily too has cherished memories from his youth working various jobs at the company’s Kent manufacturing plant with his brother and cousins. His cousin’s daughter also recently interned with the marketing team while working on her business degree at the University of Washington.

Like my own childhood memories, Heily too remembers his dad working the pancake griddle on weekends.

Heily’s dad “​​loved to make them super thin…almost like a crepe,” he says.

“The best part of the weekend was waking up to the smell of pancakes on the griddle…probably the only thing that could get my brother and I out of bed before 8 a.m.,” he adds. 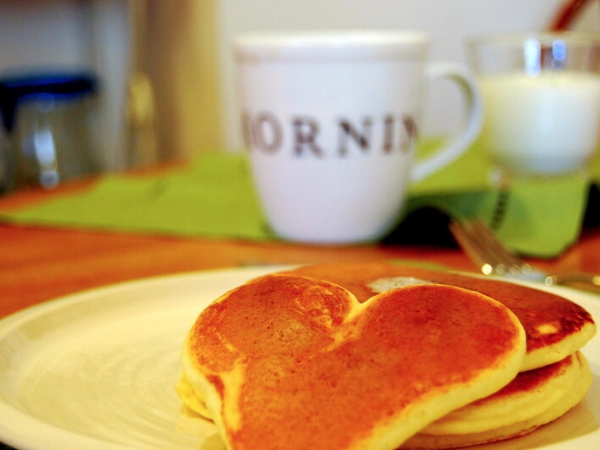 A breakfast full of heart. Photo by Mark Granitz.

That instant pie crust that was launched in a small family kitchen just outside Seattle 90 years ago is now an iconic pancake and waffle mix with more than 100 products sold across the United States. Krusteaz now makes mixes for pancakes, waffles, muffins, quick breads, cookies, dessert bars, cornbread and crumb cakes. It also sells a line of gluten-free products.

In fact, Heily says, the company sells enough mixes every year to circle the Earth nearly two times in pancakes – in other words, a whole lot of breakfast memories in the making for parents and kids.

The flip trick passed down

“​​It’s a real source of pride for me that pancakes are one of the first and easiest things a kid can learn to cook,” says Heily. “It’s really special that we can be a part of these early family memories. I’ve heard from countless families that some of their best memories are teaching kids how to flip one of our pancakes.” 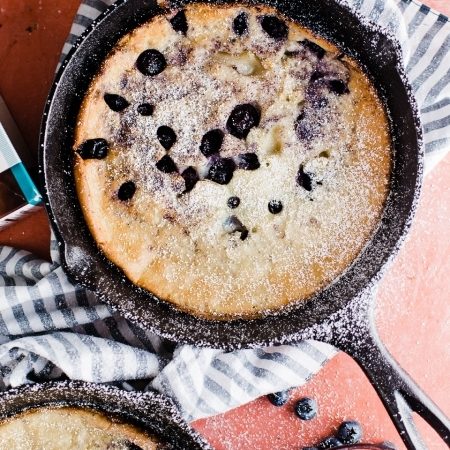 Directions
Step 1
Mix together pancake mix, water and eggs until lumps are no longer visible. Texture will be watery, set aside.
Step 2
Heat oven to 425°F and place two 6-8 inch skillets in the oven while it pre-heats. Once preheated, remove skillets and place 2 tbsp of butter and ¼ cup of blueberries in each skillet. Stir until butter is melted.
Step 3
Pour 2/3 cup of pancake mix into each skillet and place back in the oven. Cook 15-20 minutes, until golden brown.
Step 4
Remove and let cool. Serve with powdered sugar, maple syrup, and a more blueberries. 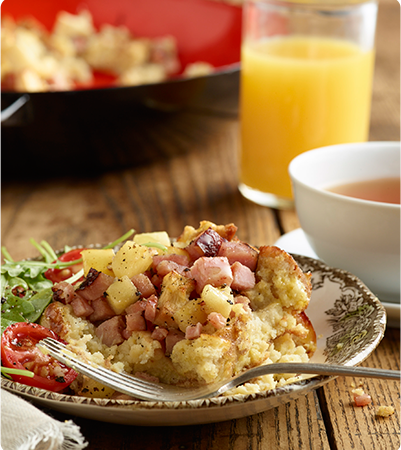 Step 2
Place pancake pieces, apples and ham in prepared pan. In a medium bowl, whisk together eggs, half and half and maple syrup; pour over apple, ham and pancake mixture in pan.

Step 3
Bake 40-45 minutes or longer if a firmer strata is preferred. Let stand about 10 minutes before serving. Brush with melted butter, if desired. 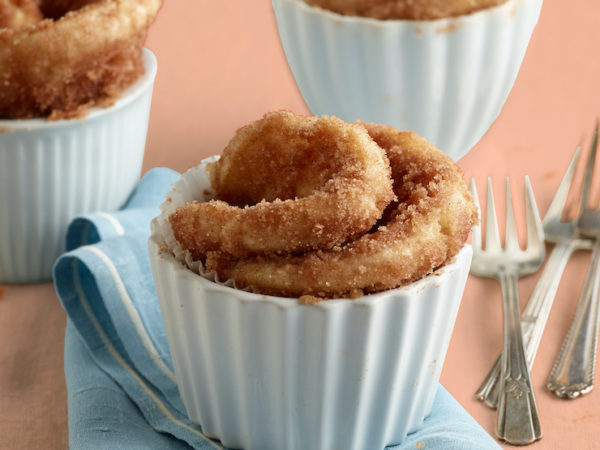 Step 2
Stir Krusteaz Buttermilk Pancake Mix, water, together with a wire whisk. Batter will be slightly lumpy. (Do not over mix). Pour slightly less than 1/4 cup batter per pancake onto griddle. Cook pancakes 1 1/4 minutes per side, or until golden brown, turning only once.

Step 3
To assemble: Preheat oven to 350°F. Combine sugar and cinnamon. Brush pancakes on both sides with butter and sprinkle with cinnamon sugar. Fold pancake in half and roll into a crescent. Place pancake in paper-lined muffin cups. Bake 13-15 minutes or until crispy. Makes 13-14 servings.

‘Breakfast before school: How families get it done”