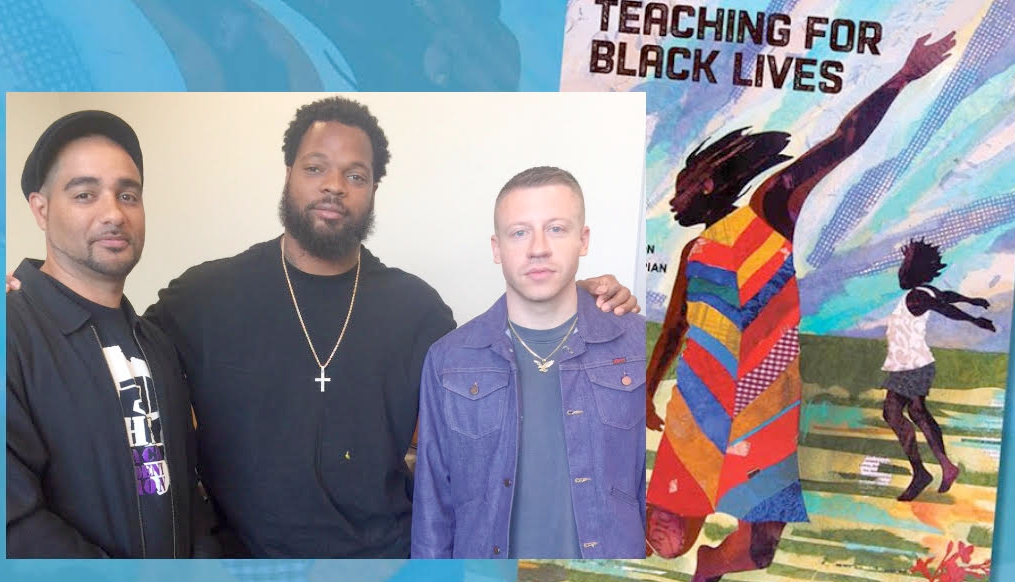 “Teaching for Black Lives” is a collection of teaching activities, role-plays, essays, poems and art created to help educators humanize African-American people in school curriculum. The book gives examples of how teachers can connect the curriculum to young people’s lives and explores how classrooms can be designed to challenge racism.

“The contributions that black people have made to this country are integral and the struggles that kids have to go through facing all forms of institutionalized racism and discrimination are real,” says Jesse Hagopian, an editor of the book and an ethnic-studies teacher at Seattle's Garfield High School.

Hagopian expressed gratitude to Bennett and Macklemore for wanting to help create a more equitable educational experience for Seattle students. He said he is excited about the book’s potential long-term impact.

“When students don’t see themselves in the curriculum they often check out,” Hagopian said. “This book is an attempt to change classrooms around the country. To empower Black students to see the great contributions they’ve made and understand how they can be part of change today.”

The book features lesson plans for teachers and policy prescriptions to help undo institutional racism in the public-schools. Last year Seattle Public Schools convened an ethnic studies task force that helped coordinate the piloting of ethnic studies curriculum at fifteen schools—including educators who used materials from Teaching for Black Lives. Hagopian says the response so far has been encouraging.

“It’s really energized our Black students, but it’s also been revealing and eye-opening for our white students and our Asian students and Latinx students,” says Hagopian. “All of our students have been starved of this critical history and are excited to see what they’ve been missing in the standard master narrative.”

Hagopian helped found the “Black Lives Matter at School” initiative first launched in 2016 at John Muir Elementary. The week of action has since expanded to cities nationwide. In February, thousands of teachers come to school wearing Black Lives Matter T-shirts and advocating for anti-racist curriculum and policies like restorative justice.

“I think there has been a misconception amongst a subset of people that when you say ‘Black Lives Matter’, you mean only black lives matter,” says Hagopian. He compares the ‘all lives matter’ counterpoint to a patient going to the doctor to fix a broken arm and the doctor checking every bone in the patient’s body instead of just focusing on the broken one.

“Of course all lives matter,” says Hagopian. “But all lives can’t truly matter until we specifically focus on those who are most marginalized and impacted by systems of oppression, black people being among them.”

Hagopian emphasized that the book is not just for educators and policy makers. Parents can use the book as a resource to engage their kids in meaningful conversations at home.

“Anybody who cares about creating a racially just school system will benefit a lot,” says Hagopian.

Copies of “Teaching for Black Lives” are on their way to Seattle now. Hagopian hopes their arrival can be an event where teachers can come pick up copies and sign up for book clubs to discuss the text and how to integrate it into Seattle classrooms.

“This is the book I wish I had coming up in school but it never existed,” Bennett said in a press release. “Now we have the opportunity to educate thousands of youth about the Black history that was too often missing from my schooling—from the building of the White House, to the role of Black youth in social movements, to organizing for restorative justice today.”

Macklemore added, “With everything from history, to poetry, to visual art, these lessons will help educators affirm the lives of their Black students and create deeper dialogue in our schools about the struggles and contributions of Black people that all students need to learn.”

The editors of “Teaching for Black Lives” will be participate in a Seattle Town Hall book launch event on Monday, Sept. 24, at the Langston Hughes Performing Arts Center.

“If this book and the ideas within it are fully embraced by parents, students, teachers, administrators and the school system as a whole,” says Hagopian. “An incredible transformation is possible.”