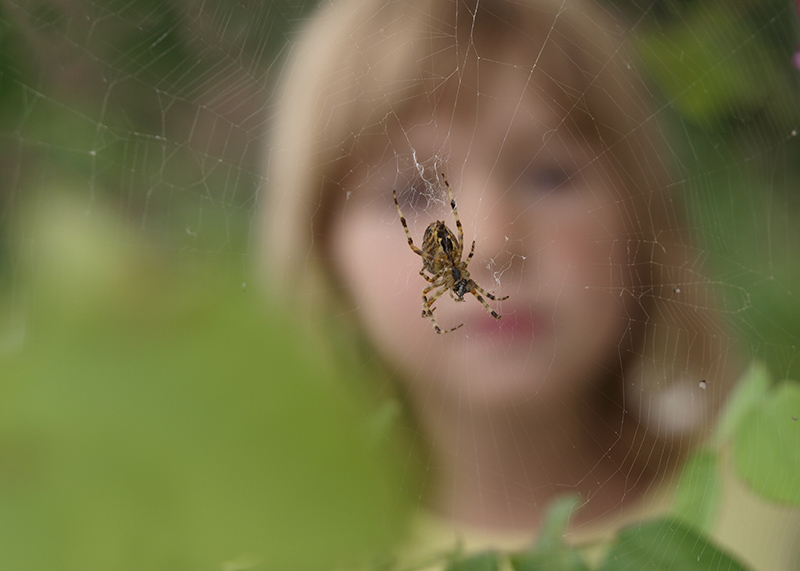 In September, it seems that Seattle is full of spiders. The webs are all over the place, catching water droplets in the morning fog. Stout spiders perch in the middle of hubcap-sized webs, the trussed-up remains of flies and bees around them. And in the evenings, big brown spiders startle us by dashing across our floors.

Actually, saying that early fall is Seattle’s spider season is kind of like saying that summer is Seattle’s Mt. Rainier season. Spiders are here all the time. It’s just that in September, we get the best view. Outdoor spiders are at their largest this time of year and build bigger webs. Rod Crawford, who curates arachnids for the Burke Museum, explains the myth of fall spider season on his very entertaining page: “Spider Myths.”

By the way, another of Crawford’s spider myths is that it is humane to put a spider outside if you find one in the house. It isn’t. Spiders you find in your house will most likely die outside.

But because spiders are so easy to notice this time of year, this is a great time to learn more about them.

5 types of spiders common in Seattle

A big spider that spins a web in the stereotypical spiral with spokes. Commonly found in urban yards, front porches, and other conspicuous places, these are great webs to watch. Making the web takes about an hour. First the spider sets up the spokes, then, segment by segment, spins out the parts of the spiral. Some of the strands are sticky, so as to catch prey. Others are smooth enough to for the spider to run on. If you’re patient and lucky, you might see what happens when an insect hits the web. The spider runs toward it, bites it, injecting venom to paralyze it, and immediately wraps it in silk. Over the next few days, the spider will eat it.

These are the types of spiders celebrated in such children’s books as “The Very Busy Spider,” by Eric Carle, “Be Nice to Spiders” by Margaret Bloy Graham, and of course “Charlotte’s Web” by E.B. White, though Charlotte was a different, but related species, Araneus cavaticus, the barn spider.  (Her full name was “Charlotte A. Cavatica.”) 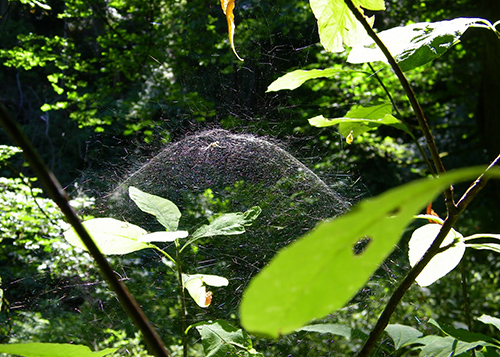 In most dome webs, a single spider sits upside-down in the middle.

These spiders build their webs by the dozen in woods near here. Discovery Park and Lincoln Park are good places to see them. They weave their silk into domes, suspended in the greenery. By fall, some of these are as big as upturned cereal bowls. The spider typically waits at the top of the dome, unless she’s busy mating, which is something you can often see in August and September. Look for webs with two spiders in them: a male (he’s the one with two round appendages near his mouth) and a female. You’ll most likely spot them in the dome together clasping and unclasping from each other. Courting among these spiders takes quite some time. Seriously, you and your kids are going to get bored and move on long before they are done. 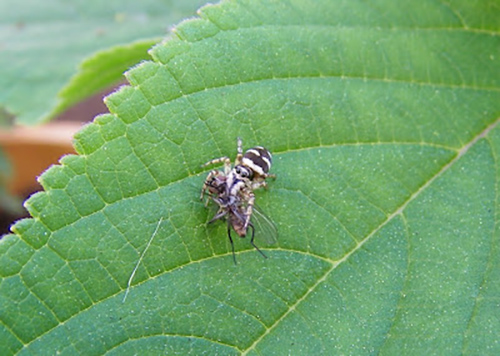 These spiders are tiny (maximum length is about 1/3 of an inch) and swift. They don’t build webs but roam around fences, rocks, front porches and gardens, leaping on their prey. Because they rely on eyesight to hunt, they have big eyes. I think they’re cute, which may be an odd thing to think about a spider.

This small grayish-brownish spider spins webs in corners or under furniture and is the most common spider species in houses, though you may not notice them unless you are trying to clean.

These are the spiders that make grown men and women squeal and jump on top of chairs. The biggest males can have a four-inch leg span. These spiders live in your house and keep to themselves during the day, but at night, during mating season, the males start scuttling around the house in search of females. These critters are not at all aggressive to people, though if you try and crush one with your hand, it might deliver a bite that stings. The best thing to do is to leave them alone. My feeling about them is that I’d rather have a big scary spider in the house than whatever the spider ate to grow to that impressive size. As Rod Crawford writes in “Spider Myths,” “Just wave as they go by.”

Fiona Cohen is the author of The Curious Kids Nature Guide.

More ways to explore nature in the Pacific Northwest

Look for insects while strolling a wetland boardwalk

Make a fall nature collection in the arboretum 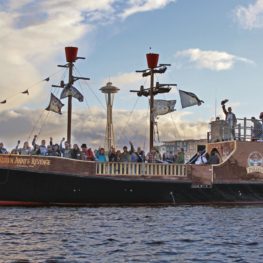 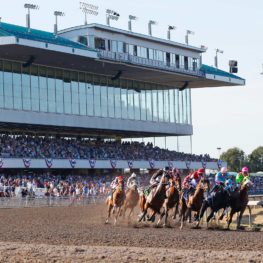 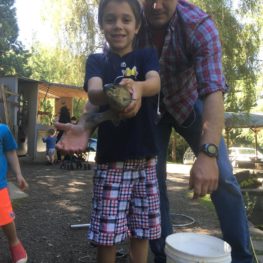 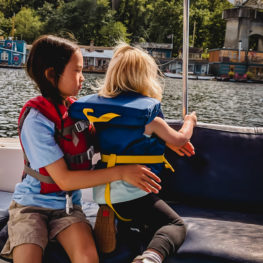