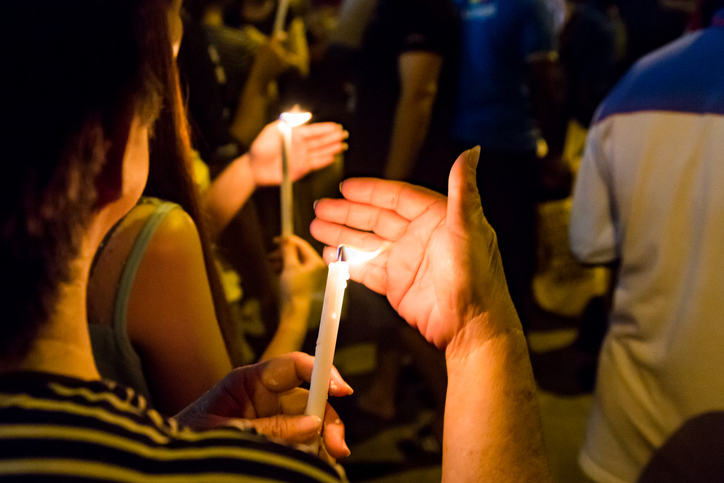 As Seattle students rally against gun violence in the wake of an Ingraham High School shooting that left one teen dead and another in custody, St. Dunstan’s Church in Shoreline is preparing to host “A Vigil to Honor All Those Impacted by Gun Violence.” The gathering is an act of remembrance for all the victims of gun violence – those who have died, who have been injured, who have been mentally or emotionally devastated and those left behind by gun death.

“A Vigil to Honor All Those Impacted by Gun Violence” will take place Wednesday, December 14th from 7 to 10 p.m. at St. Dunstan’s, 722 N 145th Ave. in Shoreline. This year, December 14 marks the 10-year anniversary of the Sandy Hook School shooting.

Event organizers point out that by the end of 2022, more than one million Americans will have been killed or injured by firearms since the Sandy Hook massacre in 2012. According to members of  Grandmothers Against Gun Violence, the United States averaged more than one mass shooting a day in 2022.

“Every day, 120 people die and another 200 are wounded by gun violence,” Debbie McDonald said in an article published in Seattle’s Child following the massacre of 19 children in Uvalde, Texas, earlier this year. McDonald has been a board member for GAGV and the Alliance for Gun Responsibility and serves on the GAGV Legislative Committee and Diversity & Partnership Committee.

“The country’s gun violence crisis reaches far beyond mass shooting events,” wrote MacDonald. “On average, 321 people are shot every day in the U.S. Of those, 42 are murdered and 65 die by suicide. Yes, 210 survive; but their lives – and the lives of those around them – are changed forever. Too often, violence begets violence.”

Gun violence was the top issue listed by Seattle’s Child readers in a recent survey of parents’ top concerns for their children. The survey was taken before the Ingraham High School shooting.

Vigil organizers point out that when gun violence strikes, “the victims, survivors, their families and communities are often forgotten.”

In their invitation to the public, vigil organizers wrote: “We will unite to host a candlelight vigil in loving remembrance for all those who have fallen victim to the ongoing epidemic of gun violence in America. Our mission is to support families and communities impacted by gun violence, unite the gun violence prevention movement, educate, raise awareness, and keep this critical issue front and center throughout the nation.”

Several organizations are partnering with the church for the “A Vigil to Honor All Those Impacted by Gun Violence,” including Grandmothers Against Gun Violence, Moms Demand Action for Gun Sense in America, Alliance for Gun Responsibility, Brady Campaign, Soul Box Project and Washington CeaseFire.