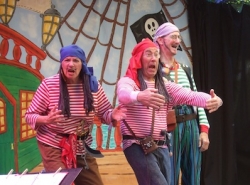 Our family has a fun new holiday tradition, and it involves cross-dressing, beer and shouting things in a theater. It's all thanks to the Fremont Players' lively performance of Sleeping Beauty and the Pea, a British Panto held at the Hale's Ales Palladium in Seattle's Fremont neighborhood.

What is Panto? It's a style of theater popular in England during the holidays – think exaggerated comedy based on fairy tales, with garish costumes, actors in drag, and audience participation.

As we stepped into the warehouse-style theater, which felt more quirky and cozy than cavernous, we were greeted by one of the actors warming up the crowd with a rousing (read: physically active) rendition of My Bonnie Lies Over the Ocean. Next, we were given a rundown of what was expected of us as the audience. Basically, no sitting quietly. We were to boo the villains, cheer the heroes, occasionally taunt the actors in a call-and-response fashion, and loudly point out when someone, or something, was sneaking up behind the actors onstage.

Let me just say that "loud" was a major theme of the night. The actors' voices were amplified to a reasonable level, but the audience participation could get quite raucous. If you have a kiddo who's sensitive to noisy crowds, consider yourself warned. It's all in good fun, though, and my kids were delighted to be asked to behave in such a way during a performance. My 6-year-old son called it a "blurting-out show" and never hesitated to do his part, feeling especially helpful when it came time to alert the actors of the ghosts lurking in the woods. My 3-year-old daughter was a little more subdued, but enjoyed herself nonetheless. She was more concerned with figuring out who was a boy and who was a girl, given the gender bending inherent in this type of production. One little boy next to us was delighted to recognize Prince Rudy as being the (female) teacher from his music class.

But back to the show. The story combines elements of the fairy tales Sleeping Beauty and The Princess and the Pea into one seamless narrative. To give a very brief synopsis, Princess Perpetua has two fairies in her life, one good (Esmerelda) and one not-so-good (Formica), and we root for her to find true love with a prince who can break the sleeping spell Formica cast on her. As for the pea, it should come as no surprise that she's a walking, talking character. Given the Panto style, there were original songs, a sprinkling of slapstick, witty dialogue and a few wink-wink jokes for the adults that went sailing over the heads of the youngsters.

The casual atmosphere meant kids could sit on the large rug up in front of the stage or on the folding chairs with their parents. Completing the experience was live musical accompaniment by the Fremont Philharmonic Orchestra. At the conclusion of the show, the actors mingled with the audience, posed for photos and handed out postcards.

Should you feel hungry or thirsty during the show, rest assured that Hale's offers beer, wine, soda, hot dogs, bratwurst and popcorn at prices that range from $1 to $6 (cash only). The ticket prices were affordable, and I also appreciated the option of a 4 p.m. show time; the kids are up from their naps, and there's time afterward to go grab dinner without being out too late.

A few more tips: You'll find the theater space behind the brewery at Hale's Ales Palladium. Allow yourself extra time to park and get settled in the festival-style seating. The performance runs about 90 minutes, including a 10-minute intermission.

The best thing about Sleeping Beauty and the Pea is that it's truly an all-ages show. I'd be hard-pressed to decide if it was a show for kids that also appeals to adults, or the other way around. Holding a beer and sitting next to my husband while our kids were up on the rug, I could've sworn it was date night. After finding out how my family liked the performance (answer: "awesome!"), I'm sure we'll be making this "blurting-out show" an annual tradition (Fremont Players does a Panto show each year).

Cost: $12 adults, $6 kids and seniors. The box office opens half an hour before show time. Purchasing tickets in advance is recommended, as the shows often sell out. Bring cash for concessions.

Barb Kittell is the calendar editor for Seattle’s Child and mom to two young kids who love to make noise in a theater.