Despite what you may have heard from your mother or grandmother, using "baby talk" with infants – that is, speaking in exaggerated, elongated words and using an animated tone – does not result in bigger kids who talk like babies.

In fact, a new study conducted by researchers at the University of Washington and the University of Connecticut finds that using parentese (the scientific word for baby talk) while engaging your baby in one-on-one verbal interactions (just the two of you) actually leads to better language development down the road.

"Parentese by itself is not as powerful as parentese occurring in one-on one interactions between infants and parents," explains Nairán Ramírez-Esparza, assistant professor at the University of Connecticut and study co-author. "And conversely, one-on-one interaction by itself is not as powerful. What helps (develop language) is the combination of both."

During the study, which will be published in the journal Developmental Science, 26 1-year-olds wore vests embedded with audio recorders. The recorders collected sounds from the children's auditory environment for eight hours a day over four days. Researchers examined 4,075 30-second intervals of that recorded speech. Then, when the participants reached age 2, their parents filled out questionnaires measuring how many words their children knew.

The relationship between baby talk and language development persisted across socioeconomic status. And that stands in the face of the commonly held belief that babies who hear the most language around them acquire language the fastest. In other words, talking in adult tones to your baby – even if you do it nonstop – won't boost your baby's ability to speak.

"It is the quality of the interaction, not the quantity," stresses Ramírez-Esparza. "The infant benefits more from a specific style of interaction than just listening to words. Children respond to this kind of interaction because they appreciate it; there is real communication occurring between adult and child, not just words being sent to the baby's brain."

According to co-author Patricia Kuhl, co-director of UW's Institute for Learning and Brain Sciences, the more that parents in the study exaggerated vowels and raised the pitch of their voices when speaking to their 1-year-old babies, the more those infants would babble back. Babbling is the precursor of talking. When parents used parentese while speaking with their baby individually, without other adults or children around, their babies babbled even more – and they knew more real words at age 2.

"The fact that the infant's babbling itself plays a role in future language development shows how important the interchange between parent and child is," Kuhl said in a recent news release.

"If you are a baby talker, keep doing it and forget about what people say about sounding like a baby," Ramírez-Esparza says. "For parents who don't use this kind of speech, I would recommend they make the effort to have a few interactions with the child where they take their time to exaggerate words and talk on one-on-one." And, instead of reading a bedtime story to your two children in one room, Ramírez-Esparza suggests a one-on-one reading session with each child individually.

One piece of data unveiled in the new study will not be included in the report, but is interesting nonetheless:

Cheryl Murfin is a writer and editor who lives and parents in Seattle and Los Angeles. 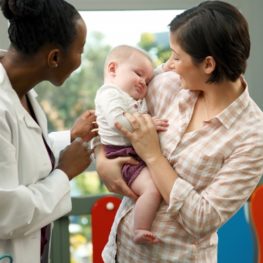