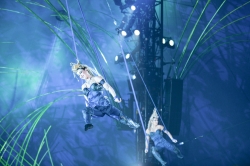 We didn't know where to look. There were warrior women in scarlet and black body suits, and magnificent peacocks with fanned tails, and lights and smoke, and a lady in blue descending on a silver moon frame, and a goddess-queen person in jewel-toned robe playing the cello, all beneath metallic arcs of green and gold. It was the opening act of Cirque du Soleil's dizzying, brilliant, frenetic, then quiet, then pounding, then reflective new production, Amaluna. My 10-year-old friend Madison and I loved it.

Amaluna roughly translates to "mother moon," and it's a female-dominated show. Like most Cirque du Soleil productions, there's a loose plotline tying the acts together. Madison and I forgot to look up the story beforehand, but it didn't really matter. Briefly, the queen-goddess Prospera directs her daughter Miranda's coming of age ceremony. She creates a storm, which brings a group of young men to her island kingdom. Miranda and one of the young men, Prince Romeo, tentatively begin to fall in love, but many forces try to keep them apart, led by Cali, the jealous half-man, half-lizard. In the end, the Valkryies, swooping high above us on aerial straps, help Miranda liberate Romeo and they share a shy kiss.

The acts were enough in themselves, beginning with two joyous golden sprites on unicycles and moving to Madison's favorite, the Icarian games, consisting of Chinese acrobats twirling glowing "watermeteor" globes as they tumbled, balanced and flipped – over and over and over again. Before we could catch our breath, Prospera conjured up a violent storm with thunder and lightening, accompanied by the god and goddess of wind flying and twining and twisting on long aerial straps. The moon goddess gyrated gracefully on her descending rings, and then ascended to allow Miranda to do a slow-motion ballet on the rim of a water bowl, bending her subtle body into unbelievable shapes.

After intermission, there was a funny scene with the young men monkeying about on the uneven bars until the Amazon ladies chased them off and showed their stuff. Not to be outdone, the men used a spring-loaded see-saw, trampoline and inclined plane to defy the forces of gravity. There were a couple of fake battle scenes I found less than compelling, followed by a mesmerizing balancing act. It wasn't Madison's favorite because of its slowness, but it was fascinating to see the woman in gold picking up long bone-like sticks between her toes and arranging them with her hands into a long cantilevered structure. It's almost impossible to describe in words, but the whole audience was holding its collective breath.

The show hurtles to a close with Cali performing an intricate juggling act, tight-rope walkers cavorting in ballet slippers and even high heels, women in stunning black and silver costumes doing an Indonesian ritual dance, and those soaring Valkyries. Trapeze artists and men that walk in giant turning wheels were the only acts missing from a traditional Cirque du Soleil production. As usual, the costumes are beyond gorgeous.

Incongruously, the dramatic action was periodically interrupted by two clowns doing funny, but silly, things, including a childbirth sequence (more about that later). Madison preferred the dramatic acts. I liked the clowns, but thought they should have been at the beginning, at intermission or at the end instead of as a jarring break in the fantastical action.

Amaluna is recommended for children 10 and older, although most of the content is fine for younger children – no violence, sexuality or profanity. There are three considerations:

All in all, we'd highly recommend it for most members of your family – or as a Valentine's treat for yourself.

Parking: $15. No alternatives. Allow 20 minutes to get from the park entrance to your parking space.

Wenda Reed is a Seattle-area writer and amazed lover of circuses of all kinds. Madison Jones is a Bothell fourth-grader.