It was a serendipitous time to review local kid-band favorite Recess Monkey’s upcoming album In Tents. I was fresh from attending the latest Cirque du Soleil and in the midst of the work of fiction The Night Circus when In Tents arrived in my mailbox. The band’s promo says the album contains “fifteen songs guaranteed to amaze and astound, inspired by the circus.” That, I think, sums it up quite nicely.

Close your eyes and think about visiting the circus when you were small. You can see the colorful tents as you approach; catch glimpses of men of improbable height delicately stepping through the crowds; feel the late summer sunshine on your face; smells of hay and popcorn, horses and cotton candy wafting up to your nose; hear the soft gasp as a child’s red balloon escapes to freedom. The air is electric with anticipation. What will you see first? What will you do first? Have those memories resurfaced?

Recess Monkey has created another magical musical story by whimsically weaving together the experience of childhood with the fantasy of a circus. Puns and jokes abound and, while aimed at the 3 to 8 year old set, this album will engage and entertain their parents as well. There is a nice balance between lilting and lyrical ballads and songs with more upbeat beats. I can already see the mini-mosh pit forming for the “Popcorn” and “Bouncy House” tracks, while “Lemonade” will surely be featured on many street corners this summer. But “I Could See” is easily my favorite song on this album. It’s the new anthem for kids (of all ages) who have to wear glasses. It’s cleverly written, combining the clarity of vision with the “spectacle” of the circus and reminiscent of older Recess Monkey moments.

Three local teachers, Jack Forman, Daron Henry and Drew Holloway formed Recess Monkey. They released their first album in 2005. With a refined sense of the ridiculous, a witty way with words and a seemingly never-ending supply of material, they subsequently released seven more albums. In Tents is their eighth collaboration with the addition of musician Dean Jones.

In conjunction with the June release of In Tents, Recess Monkey has joined forces with Teatro ZinZanni and will be performing music from their new album in nine family shows now through July 15. With ZinZanni performers and a host of carnival games, the spiegeltent setting will provide a unique opportunity to see this band perform about the circus with the circus. See our Seattle’s Child parent review about the event. Come one, come all to the circus of your childhood where amazing things are anticipated and the unusual is revered. In Tents in stores June 19.

Erika Lee Bigelow lives in Seattle with her very own three-ring (I mean child) circus. 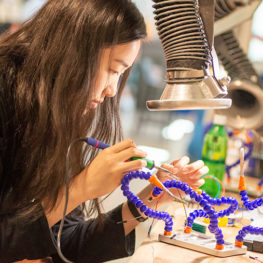