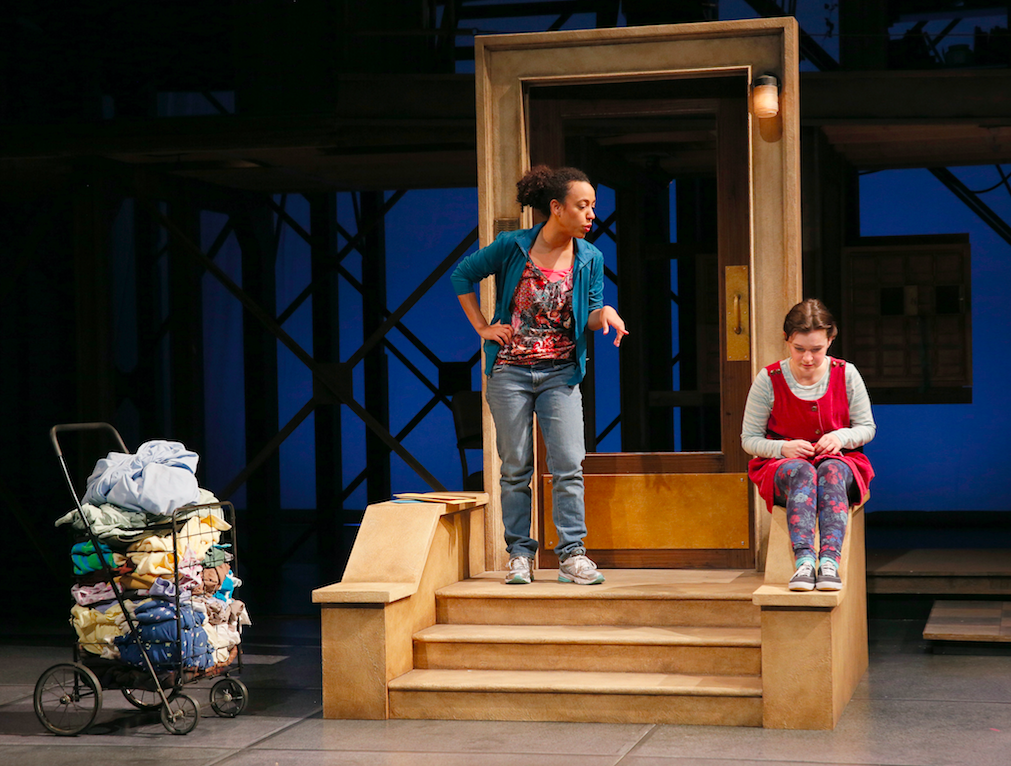 Dilemmas, decisions, procrastination, fears, loneliness and new friends, Brooklyn Bridge has it all. Seattle Children’s Theatre’s newest show is a co-production with the University of Washington’s School of Drama. While the story may not be familiar, the show explores universal truths that will resonate with the young and old alike.

Sasha is a ten-year-old latch-key kid living in New York City.  The night before her major research project is due, she finds herself at home alone and unable to find a pen. Breaking the rule of not leaving her apartment, Sasha sets out to find a pen and along the way she finds so much more. Despite having lived in the same apartment building her entire life, Sasha did not know her neighbors at all.  Her quest for a pen forces her out of her apartment, out of her comfort zone and into contact with a variety of neighbors. While nary a one has a pen to offer, they provide Sasha with things more valuable than a pen.

The staging of the show is both simple and impressive at the same time. There are no changes, yet scenic designer Matthew Smucker has outdone himself. The entire stage is filled with a side cut view of three floors of Sasha’s apartment building. Conveniently the elevator is out of order which forces the actors to use the stairs and make the action plausible. The vast majority of the show occurs on the middle floor where Sasha lives. While there are no bad seats in the house, I think the preferred seating for this show is smack dab in the middle. I usually prefer to sit as close as possible in order to enjoy the actor’s subtle expressions and other things that may be missed from the back. However for this show, especially for younger (ie. shorter) kids, the middle is better so that they are not straining their necks to look up at the middle floor for most of the show.

The cast of Brooklyn Bridge is an amazing ensemble. Sasha is played by the talented Analiese Emerson Guettinger. While she is significantly older than her character, with her fresh face and braided hair, she is able to pull off a believable 5th grader. Even my eleven-year-old daughter agreed that her voice and her mannerisms were spot on with just the right amount of eye-rolling, evasive answers and timid testing of the rules. Of all the neighbors that Sasha meets, John, played by David Pichette, was my favorite. There is something so endearing about a friendship between people of such different generations. For a kid growing up an ocean away from her own grandparents, this relationship may prove to be the most valuable of all for Sasha.

While there is no doubt that this show has a heart of gold and a great message, I would be amiss if I didn’t stress how out right, down right, straight out funny it is too. The script written by Melissa James Gibson is an example of family writing as its best. There is something in the story for everyone. The dialogue is filled with such cleverness. Sasha learns new words and idioms from each of her neighbors and they reappear in later conversations over and over. If all vocabulary lessons could be this much fun, students would be clamoring for more. The laughs continue in recurring scenes with strange apartment denizens who are waging a silent war in the placement of a potted plant. Rebekah Patti provides a great comedic presence in her portrayal of Trudi, the heavy-footed resident of the 4th floor who is perpetually late. The show is full of heart, but that heart is definitely full of laughs.

Uplifting, hopeful, charming and challenging, this show will stick with you long after the curtain closes. On the walk back to the car, my own daughter enjoyed making up her own versions of what happened next. Indeed, you can’t help but root for these characters and wish you had another glimpse into their apartment building to see how the events of that one night changed the relationships of its inhabitants. Beyond the characters, it may even leave you on a quest of your own to make more and stronger connections with your neighbors and to sift through all the facts that bombard us in our daily lives and find what’s left, what really matters.

Kelly Rogers Flynt is a freelance writer based out of Lake Forest Park and the parent of children ages eleven and fourteen who are lucky to have a great network of neighbors of their own.