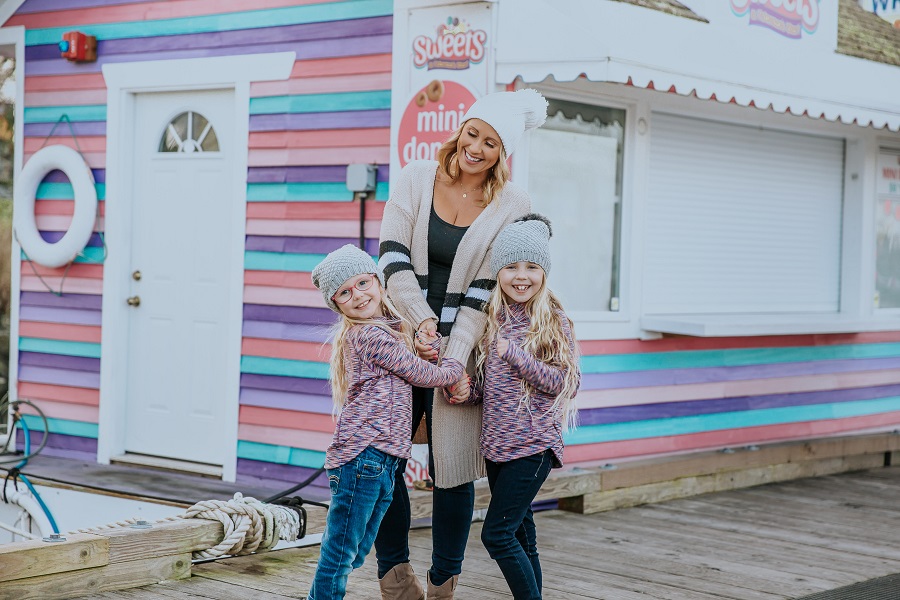 For Seattle mom and family lifestyle blogger Portia Smith, sharing photos of her kids with her 87.9K Instagram followers is a way to encourage other families to explore, adventure and travel together. “I believe in gifting experiences over ‘things,’ creating memories with our children that resonate for a lifetime,” said Smith via email. “I have no problem sharing photos of our family as an example of how we live by this philosophy.”

Featuring rainbow-filtered photos of her family in envy-inspiring locations, Smith is self-admittedly a contributor to “the notorious highlight reel on social media.” She finds more value in sharing the positive moments than reflecting on the negative. “We all have tough, dark days, especially as parents, but I feel it’s my role as a content creator to promote optimistic outcomes and focus on the good. The energy you exude is the energy you receive,” says Smith.

To maintain privacy, Smith avoids posting in real time and pays close attention to her readership. “I obviously don’t disclose super specific details in regards to my children, and am hyper-aware on exactly what I share, even on Insta Stories,” says Smith. “My content is very curated in a safe, sometimes generalized manner.”

Even without a massive following, “sharenting” or parents posting photos, videos and personal information about children online, has become commonplace. In the United States, 92 percent of 2-year-olds already have an online presence. And why not? Proud parents want to share the joy their children bring by inviting supportive family members and friends into their daily lives over social media. The likes and positive comments on your child’s sweet smile or goofy dance moves affirm what you already know: your kids are amazing. But these benefits must be carefully weighed against the long-term consequences of sharing a child’s personal information in such a public space.

As we post sonograms, first steps, swim meets and prom photos, it’s easy to forget we’re creating a digital history for a human being that will follow them for the rest of their life. What kind of footprint do you want to start for your child, and what will they think in the future about the information you’ve uploaded?

“Ask permission from your kids and really think about how the photos and comments you post could come back to haunt them,” says Dr. Yolanda Evans, an adolescent medicine specialist at Seattle Children’s hospital and mother of three. Children are twice as likely as parents to report that adults shouldn’t “overshare” by posting about children online without permission, according to a study conducted by researchers at University of Washington. Parents should consider everything from a photo’s potential to inspire teasing and bullying to violations of medical-privacy laws and interference with career prospects.

There are psychological concerns as well. We don’t know yet what the long-term effects that growing up behind the eye of a smartphone camera will be on today’s young people, but Dr. Evans speculates it may create a pressure to always be “on” and a reluctance to express genuine, less insta-worthy emotions.

“Don’t get mad at your kids if they don’t want to smile and pose,” says Dr. Evans. “I think it’s important to give kids permission to be grumpy and not feel like they have to always look happy.”

The ‘creepers’ are out there

While expecting her first baby, Redmond mom Sarah Fong assumed that she would one day post precious photos of her child on Facebook and Instagram just like everyone else in her social network. But after her daughter arrived, Fong reconsidered. A number of family members were randomly sharing photos of other relatives’ children on social media without permission. She realized that once you post a photo online, you lose control over it. “I didn’t want some weird creeper using her picture for lewd and salacious acts,” says Fong.

Her concerns may sound paranoid to some, but they aren’t unfounded. On any given day, over 17,000 devices in Washington state are being used by predators to trade images of children.  The Child Rescue Coalition (CRC), a nonprofit organization that tracks over one million unique pre-pubescent abuse image and video files traded on the Internet every day, reports that child predators actively seek out popular hashtags such as #bathtime, #pottytraining, #nakedkids and #toddlerbikini to find photos of children in states of undress. Unfortunately, with the rise of the internet, pedophiles are now able to easily trade photos, tips and techniques on how to seduce and lure children into sexual encounters. A secondary consequence of this horrifying anonymous social sharing is that it gives the offenders the mistaken impression that this behavior is normal and therefore acceptable.

“The demographic of the child predator has shifted from the creepy old man in the basement to young men between the ages of 17 and 36 years old,” says SPD Internet Crime Against Children Task Force Commander Mike Edwards. “Often these men are married or in a relationship and have professional careers.”

Even if you keep your social media accounts private, anyone in your network could easily screenshot the photo, tag it, download it, or otherwise use it — and you might never know. How many of us really know and trust every single person in our online social network? That mutual friend from college? The awkward former co-worker? That relative twice-removed?

In 2015, an Arizona mom accepted a Facebook friend request from an old friend from high school. Unbeknownst to her, the man downloaded 83 innocuous photos of her 9-year-old daughter from her Facebook page and posted them on a child pornography website with sexually explicit captions. This is an extreme example, but according to Edwards, “sharenting” gone wrong is a more common occurrence than you might think.

“We are in the habit of leaving the location of our phone on so we don’t think about it when we take photos and post them,” says Captain Edwards. “If people are trying to utilize your photos for nefarious reasons, they can pull the photos and find out where the kids are hanging out.”

In a country where 76 percent of kidnappings and 90 percent of all violent crimes against kids are perpetrated by relatives or acquaintances, sharing personal information about the location, likes, and dislikes of a child online increases the probability of those details being revealed to someone who might wish to harm the child.

SPD Strategic Advisor Kelly Crouch encourages parents to adjust location privacy settings and capture important memories in less traceable locations. “We’re all out there on the first day of school taking the photo of our kid in front of the school sign,” says Crouch. “Take the photo in front of the classroom door instead.”

So how can you share that enchanting photo of your kids at the pumpkin patch with grandma without worrying that it will be repurposed for unimaginable horrors? Common Sense Media recommends that parents use privacy settings; limit the audience of a post (only to family, for example); turn off your phone's GPS; and consider using a nickname for your kids.

Ideally, parents would switch over to a private photo-sharing site such as Picasa or Flickr that requires a log-in. Tinybeans and Qeepsake are apps that were designed specifically for sharing photos of children safely. Creating a shared album on Google Photos or Apple Photos is another way to share images securely. Just remember to set-up two-step verification on your accounts to add an extra layer of protection.

If someone you know (say, another parent or teacher) posts a photo of your kid without permission, Common Sense Media suggests taking a straightforward approach. “Simply, without judgment, ask the person who posted it to delete it, or crop it so your kid isn't in the picture (easy to do with today's image-editing tools). Say, ‘I'm not ready for this yet.’”

If you don’t know the person who posted the photo or it’s one of your child’s peers who is unwilling to take it down, follow these instructions from the Center for Missing and Exploited Children to report a photo on different platforms.

For those who have all the facts, but still know that the pull of popular social media platforms is likely to override their better judgment, Dr. Evans says at the very least, “just pause before you post.”