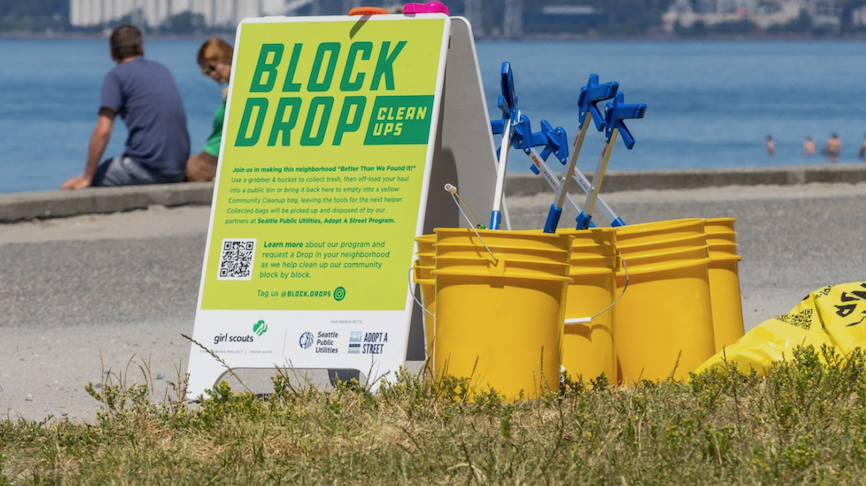 What if all your family had to do to improve the community and help the environment is take a walk and look closely.

No having to register for a volunteer event, no wasteful pre-event information package, no t-shirt, no cost to the group, non-profit or city department organizing a big event. Simple. Walk. Look. Help.

If you live in West Seattle, you don’t have to imagine.

An easy way to do good

The new Block Drop program created by three local Girl Scout Cadettes (and one dad long committed to keeping Alki Beach and West Seattle trash-free) makes helping to clean up West Seattle that easy. Simply show up at a designated location, grab a garbage pick-up stick and trash bucket, choose a direction and walk, nabbing bits of garbage as you go. No supervision, no fuss.

Block Drops are do-it-on-your-own clean-up opportunities. If you happen upon the Block Drop sign and equipment while out on a stroll, no need to announce you’d like to help. Just join the effort on the spot for a short time or for several hours — whatever you have time for before moving on. Each Block Drop runs for eight hours. You don’t have to haul the trash away. When the session ends, volunteers return to the Block Drop site to take the trash away.

According to Girl Scout Cadette Evelyn Bell, Block Drop gives West Seattle locals and visitors a chance to be part of the “solution to pollution.”

“It’s been going great so far,” she says. “I’m happy to know that our community is becoming cleaner and it’s been fun seeing so many people taking interest and joining in.” 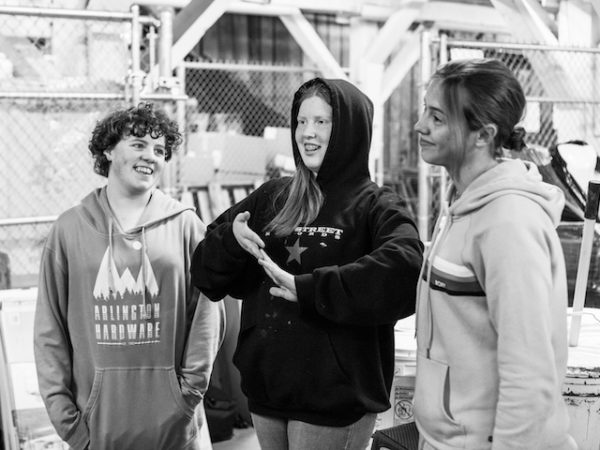 Block Drop creators Emma Kelley, Evelyn Bell and Paige Dempsey take a tour of their partner’s Seattle Public Utilities warehouse in the SODO district during the planning stages of their project in April 2022. Photo by Erik Bell.

Bell and fellow Girl Scout Troop 40149 members Paige Dempsey and Emma Kelley worked together to create the program as part of their application for the Scouts’ coveted Silver Award. To achieve the award, scouts research an issue of importance to the community, create a plan to address the issue and get it going. Sixth-, seventh- and eighth-grade Cadette scouts are eligible to apply for the award, which only a small percentage of scouts earn.

“Our group chose pollution as our topic because we wanted to keep trash out of our water, but wanted to see if we could make it easier for the public to help with,” says Evelyn Bell.

Once the teens decided to focus on the impact of pollution and trash on ecosystems, they started considering possible solutions. Luckily, Evelyn had access to one of the best sources of useful information and connection when it comes to cleaning up West Seattle. Her dad, Erik Bell, has been setting up weekend beach cleanups on Alki for several years through A Cleaner Alki. He stepped up to mentor the teens. In fact, the idea for Block Drop sprang from an experience he had during one of his group beach cleans.

As the story goes, Bell left some equipment out during the event. When he returned to get it, he found a man suiting up with his group’s gear.

“When he turned and saw me he started to take off his vest and put the gear down,” Erik Bell says. “I welcomed him to stay and he identified as being very introverted and said he didn’t feel comfortable in group settings, but said the gear sitting out looked like an invitation to help out.

“His insight really surprised me and made me realize that there were likely many people like him who’d probably like to do this type of service but who just needed an invitation and an easy way to engage,” he adds.

Block Drops, Erik Bell says, are perfect for groups as well as solo do-gooders like the man in his story. It’s a great volunteer opportunity for kids and adults who do not feel comfortable engaging socially. Because Block Drop sessions are unsupervised, they require little or no interaction with other people. It’s volunteerism uncomplicated by a lot of protocols and  rules.

The basic rule is this: use but don’t abuse equipment and always return it and the garbage you collect to the the Drop Block station. 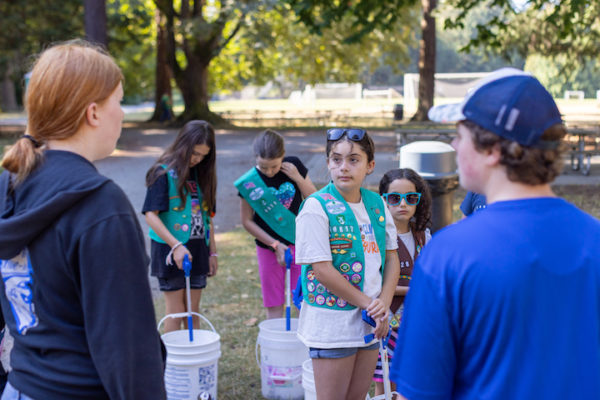 A unique approach that benefits kids

Of working with his daughter and her friends to develop the idea, Erik Bell says: “Together we were able to dial-in an idea that stood out from the way cleanups typically happen in the community. The idea of dropping passive stations around town was exciting to be a part of.”

Scouts Emma Kelley and Evelyn Bell point out that Block Drops are a great way for families to get out and do some good together.

“I think it’s important for kids and families to get out and help clean up the community,” says Kelley. “Then they will understand how much trash is in cities and how it affects the environment and wildlife. They can invite old friends, meet new people and clean up the community in the process.”

A family that picks together . . .

For Evelyn and the Bell family, participating in Block Drops and other clean-up efforts has created an indelible awareness.

“Unfortunately, [garbage is] everywhere and not just due to littering, but from how much we consume and all the packaging things come in,” Erik Bell says. “Animals and weather spread it around. So kids who come out with their families are having that awareness raised and are becoming champions of this kind of work, which will hopefully follow them into adulthood and on to the next generation.

“My family is much more aware now that this is kind of a daily ritual for us,” he adds. “It’s hard to unsee the need once you spend even a small amount of time cleaning up.”

An idea worth spreading

Now that the research, planning and development work for the Silver Award is done, the scouts’ ongoing involvement is optional. Erik Bell and A Cleaner Alki will keep Block Drop clean ups going even when they can’t help out. Still, Evelyn Bell and Emma Kelley say they will likely continue to participate.

“I hope that other Girls Scout troops will start getting involved with Block Drops,” Kelley adds. “We’ve already had a collaborative cleanup with two other troops. Erik will continue to set up and take down the stations and pick up the bags after each Drop.”

What makes it work? Community

“I’m super proud of all three of the girls,” he says. “They were very diligent and engaged during the year-plus that it took to develop the project, and all the steps it took along the way, which was pretty amazing for 13-year-olds at the time,” he says.

While Kelley says she too is proud, she stresses that it’s not the Girl Scout spirit that makes a volunteer program a success.

“What really makes the Block Drop work is the community coming out and joining in,” she says.

“Opportunities for kid volunteers to make a difference” 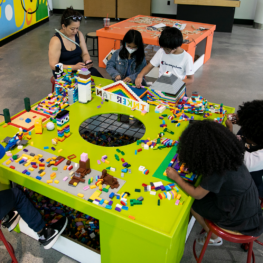