Let me begin by saying I’m not proud of how I behaved.  There’s no excuse for getting in a food fight with another Whole Foods customer.  Every Sunday I take my two boys – Ted, five-years-old and on the Autism Spectrum, and Tom, three-years-old – to Whole Foods for breakfast.  These outings give both boys much-needed practice on how to behave in public.  It also happens that the scrambled eggs at the Whole Foods breakfast bar are the only ones Ted will eat.

Before exiting the car, I go over the ground rules: calm voices, safe hands, stick together.  Our first stop is the bulk candy aisle where I load up on chocolate Sun Drops to intermittently reward these “expected” behaviors.

Something about Whole Foods sets Ted off – the high ceilings, bright lights, the assault of color and sound.  His body revs up.  His voice escalates.  He makes loud random noises and his limbs wing out in all directions, accidentally knocking things over.  Every item seems to call out to him to be grabbed, squeezed, fondled or flung.  Once he tore open a bag of hamburger buns before I could stop him.  Another time he smashed a pomegranate on the floor “to see what’s inside.”  We avoid the wine aisle at all costs and don’t even get me started about the risks associated with the salad bar.

We get looks.  They’re not the same, sympathetic kind I used to get when Ted was a toddler melting down or running loose through the grocery store aisles.  Although his condition hasn’t changed, social expectations have.  These looks communicate one thing:  Get your kid under control.

People, I would if I could.  A large chunk of my life is devoted to trying to mitigate, modulate and eradicate Ted’s inappropriate behaviors.  I am up to my aching temples with sticker charts, token systems, behavioral plans and therapy appointments.  On my better days, I redirect, encourage and incentivize.  On my worst days, I yell, threaten and bribe.

What can I tell you?  I have a kid on the Spectrum and a spirited three-year-old.  Shit’s going to happen.

Most people who raise an eyebrow back down the moment I shoot them a return look.  Others act helpful – “Oh, don’t touch that, Sweetie!” – as if I’m a hapless, overwhelmed mother who doesn’t know how to discipline her children (which I am, but still capable of telling Ted to drop the salad tongs.).

Perhaps it’s this sense of feeling a little persecuted and put down that primed my reaction on the morning in question.  Or maybe, after a very long school break, a bout of family illness, ongoing fights on multiple fronts to get my son services and the daily stress of raising a child on the Spectrum, I was just tired, fed up and more than ready to throw something.

It happened at the oatmeal bar.  I was helping Ted scoop oatmeal into his bowl.  A tall man with a mustache barged in next to us, a clear violation of Whole Foods etiquette.  Ted hovered excitedly over the toppings while the man stood too close, waiting impatiently for his turn.  Ted’s movements, as usual, were excitable but in no way threatening or destructive.

The man spoke directly to Ted.  “Slow down!” he scolded.

I’ve never liked men with mustaches, but men who use their size and gender to intimidate others are reprehensible to me.  And no one, of any size, gender or facial hair preference, speaks to my child in that tone.

There are a dozen reasons why I should have just walked away.  The man could have been armed and dangerous for all I knew.  At the very least, he was in a rotten mood.  My kids were watching.  In the back of my mind, I heard them reciting my own mantra back to me: Calm voices!  Safe hands!  This was my chance to teach them about mature conflict management, a chance I squandered.

His lidless, to-go bowl of oatmeal stood on the edge of the bar.  With a gentle nudge, I knocked it onto the floor.

“Sorry,” I said.  “I seem to have knocked over your oatmeal.”

“Security!” the man yelled.  “I’ve been assaulted!”  He started to stomp off but stopped suddenly.  He reached into my grocery cart and pulled out our large, to-go box of scrambled eggs and hurled it across the floor.

Uh oh.  This has gotten out of hand, I thought.  Definitely time to walk away.

I stopped by the cashier and gave her a slightly abridged version of events (“That man just threw eggs all over the floor.”)  I served us up a second breakfast, paid for it and we sat and ate in the café.  The man sat a few tables away and we didn’t dare look at each other.  Neither of us was asked to leave although we both deserve to be barred from the store.

What’s the take home lesson for me?  Chill out!  Go to therapy or take up kickboxing, but find a more appropriate way to deal with anger.  For heaven’s sake, what kind of mother throws oatmeal?   And also: Go easy on yourself, get more breaks and forgive yourself for acting like a three-year-old.

The take home lesson for everyone else:  Give my son some space to be himself.  He’s different.  He’s loud and annoying.  He knocks over the occasional display of loofahs and incense sticks.  But take my word for it: he is trying his best!  As am I.  Most importantly, if you have a problem with his behavior, talk to me about it – NOT HIM.

Otherwise, be warned, your oatmeal might wind up on the floor. 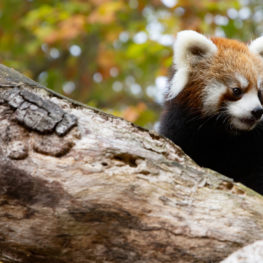