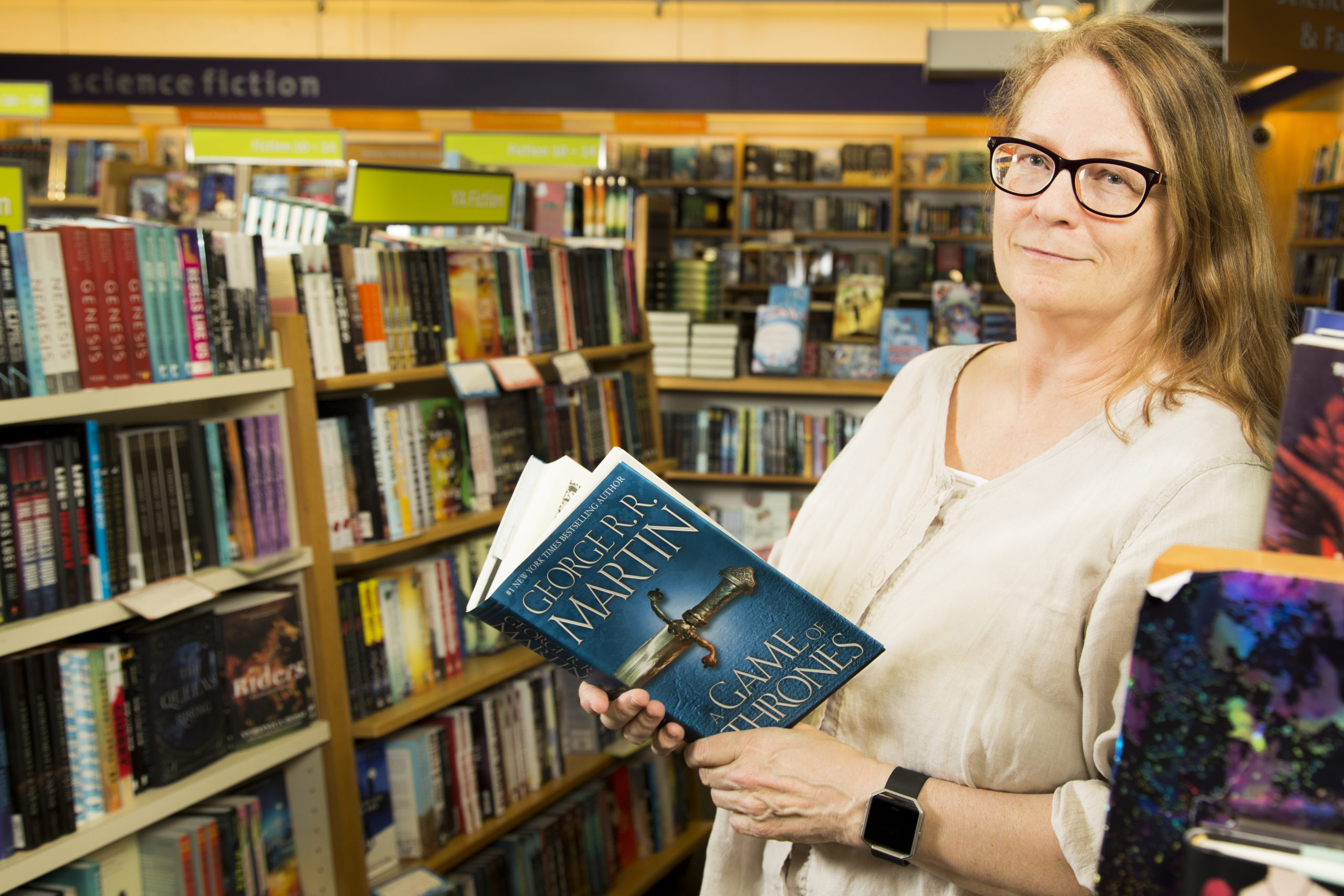 All those magical years encouraging my firstborn to read, we felt — and society seemed to back us up — he should devour whatever interested him. When necessary we negotiated the tricky emotional paths of those choices: the spider’s death in Charlotte’s Web, the rudeness of Captain Underpants, the romantic woes of post-book-four Harry Potter.

Then suddenly, my boy was in middle school, piling up his own stacks of library loans, and announcing that A Game of Thrones was next on his reading list. Automatically, I said “No way.”

I told my barely-teen he needed to develop his own thoughts on sex before taking in such seductive, potentially warping material.

And I wondered what other book-loving, banned-book-defending parents do when their children’s interests stretch far, far into the adult section.

I found there’s no magical, age-appropriate guide to steer parents of young readers to graduating levels of mature content, but there is lots of information and help for those seeking guidance.

“We don’t have age limits on anything,” says Jennifer Bisson, a youth services librarian for Seattle Public Library. She’s not there to give or withhold permission to read a book, whether it’s in or out of the formal children’s or teen section. “We’re not acting as parents,” she says, and what might be OK for one family may not be for another.

If parents want to know if a book is appropriate for their own kid, though, she’s happy to guide them, asking questions like, “How anxious does your child get about tension in a book?” or flagging potential controversies.

“I certainly would never steer a kid away from any book. But if a parent came and said, “My fourth-grader wants to read The Hunger Games,” I’d say, “I found it fun, but there’s a lot of violence early on.”

I realized, talking with her, that there’s a narrow window where our advice is even relevant. At some point, kids stop asking permission.

“I’ve never had a teen ask for a book in the adult section that made me raise my eyebrows. If they are really going after something they heard was super steamy, they’re not going to ask me,” Bisson said.

“We all read ‘Flowers In The Attic,’ for crying out loud,” she said. “I still joke about that. There’s nothing in the teen section that remotely compares to that.”

The nonprofit Common Sense Media (commonsensemedia.org) summarizes sensitive content in books as well as movies and apps, with age recommendations that seem on-target. (Their professional reviewer, for what it’s worth, pegged A Game of Thrones at 17+, while parents and kids on the site thought it was OK down to age 14.)

Then, sometimes it helps when the answer isn’t “no” so much as “not yet.”

René Kirkpatrick, children’s book buyer and supervisor at University Book Store, has spent decades in the children’s book world, including managing the former All For Kids Books & Music shop in the U District.

When people ask if kids should read a given title, she asks what the children like to read, what they last read, and tries inquiries like, “Are you OK with sex? Are you OK with violence?” or whatever’s in the books at hand.

Adult themes aren’t the only reasons for limits, she noted. Even books like Madeleine L’Engle’s classic A Wrinkle In Time have nuances and storylines that teenagers appreciate more than youngsters who want to read their older siblings’ favorites.

“At 7, do you have all the information to pull it together? The knowledge of science, the knowledge that there is evil in the world?” says Kirkpatrick. The book can be read without that understanding, but it sells it short.

Sometimes, she says, it helps kids when someone besides parents suggest “You’ll like this much more in two years.”

Instead of The Hunger Games, she might tell a not-quite-ready reader, how about the Gregor the Overlander series by the same author? Those books are also dark and epic, with equally engrossing characters, but “nobody dies.”

If I’d had that advice, I would have steered my teen toward Windhaven, a more young-reader-friendly book Martin co-wrote long ago with fantasy writer Lisa Tuttle. Instead, when my son started 10th grade this year, I said he could finally go ahead with A Game of Thrones if he was still interested. He read volumes one and two, then put them down.

I asked how he felt about being asked to wait. He thinks he could have handled them just fine in middle school.

I’m just as glad we waited to find out.

Looking for resources and recommendations?

Common Sense Media (commonsensemedia.org) is a great resource for books and more.

Booksellers like Kirkpatrick are glad to make individual recommendations. (As I left that day, she was leading a seventh-grader and her family toward the William Ritter Jackaby series, reviewed as a cross between Sherlock Holmes and Buffy the Vampire Slayer, her preferred choice over the Twilight romances.

Seattle Public Library has reading lists based on age and interests and will make individual recommendations through a program it calls Your Next Five Books.

Seattle parent Rebekah Denn remembers her father frowning over “A Game of Thrones” author George R.R. Martin’s The Armageddon Rag when she was a teenager, and asking if she wasn’t a little young for it.

Note: This story has been corrected (June 6, 2018). It previously said, incorrectly, that Rene Kirkpatrick had owned All For Kids Books & Music in the U District. In fact, she managed that store.

More: What Parents Are Talking About


Your kid wants to drink coffee: Is that OK?

Ask the Pediatrician: When should kids get cellphones?