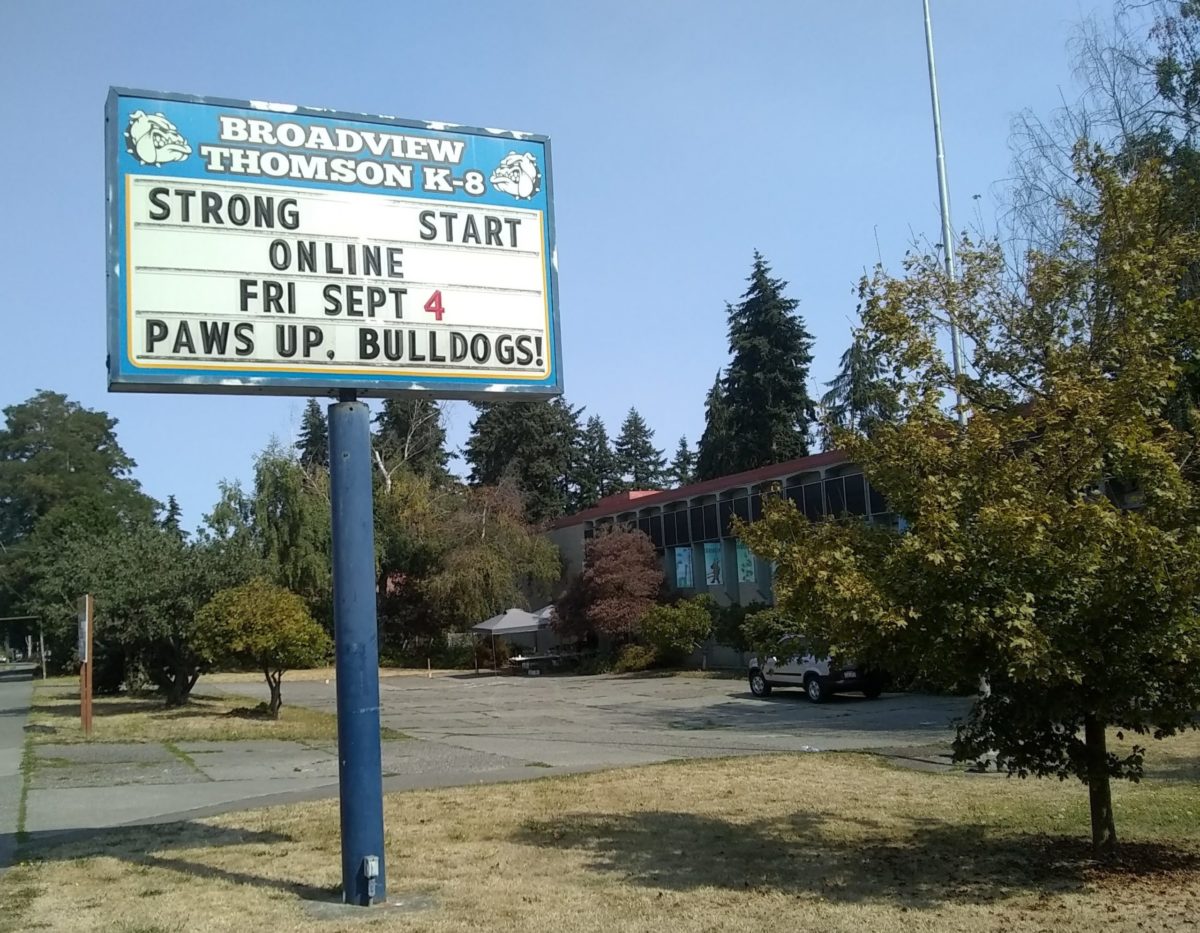 The quietest first day of school ever at Broadview-Thomson K-8. Photo Fiona Cohen

One thing everyone agrees on about remote learning this fall: we don’t want it to be like the chaos of spring.

In many ways it won’t be. Every student will have a district-issued device, schedules will be consistent and easy to follow, and teachers will be doing a lot less improvising.

“Generally speaking, we are expecting remote learning to work at a higher level and be a better experience for both students and teachers.”

True, Robinson is part of the team trying to spin a string of two-hour school days as “strong start days,” but there are signs that things will indeed be better.

Jena Meagher, who teaches third grade at Viewlands Elementary School, is glad to see the district’s plans for distributing devices, having consistent schedules, a more comprehensive technological strategy, and having teachers teaching live over video chat at predictable time.

And teachers now have more resources to draw on as they put together their lessons.

“On paper, it looks great,” she says. It helps too, that teachers are no longer novices at doing remote learning during a national emergency. “There’s a certain level of comfort that we’ve been through the hardest part of it.”

But when she thinks about remote learning is likely to work for the 19 kids in her class, she worries about some of them.

“I am really concerned about those kids who are not living in stable privileged households,” she says. ‘I don’t know specifically how they’re going to reach a lot of our families.” One child in Meagher’s class is with his father, who is picking fruit in the Midwest. She isn’t sure how he’s going to get connected.

Tricia DeVille has the same worry. She teaches a K-2 class at Dunlap Elementary School that is for recent immigrants. Kids arrive in her class at any time of year, and stay for a calendar year before moving to a regular classroom. How many she has varies. It’s been as low as one and as high as 26. Last spring, she had nine students, but when remote school started, communication was tough.

“Amazon had donated laptops, but the families didn’t have Internet,” she says. In the end, only one of the nine was able to connect.

She ended up corresponding with her students through weekly paper packets. She also fundraised to help families with groceries.

“There’s a plan,” she says. “In the spring there wasn’t really a plan, it was everyone doing what they felt like doing or not doing.”

But she doesn’t how much the plan will help her students.

This year, she has four students. Three are Spanish-speakers from Central America, and one is Vietnamese. The three Spanish-speakers were in her class last spring, and were unable to connect then. Two of them connected on the first day of school. One of them only gained her Internet connection the night before, after an instructional assistant stopped by the house to help. DeVille rejoiced.

“I got chills. She gets to go to school!” she said.

But she still has two more students without connections.

“I’m just going to keep asking the district: ‘What’s your plan for this?’ It’s not just my families, it’s families all over.”

A journey to Mars

Alan Kahn teaches language arts at Garfield High School. He says that after school went online, attendance at many of his classes went down. When he talked to those who weren’t coming, there were various reasons. Some lost motivation, or were depressed. Others had parents who lost jobs, and had to get jobs themselves to help the family get by. Those who remained in his video screen were disproportionately white and well off.

“It accentuates the inequity issue. The kids who have the privilege of having parents who are employed, and have a steady internet connection are the ones who are there.”

Even though kids have devices, he expects there will still be many without Internet connections.

Teachers and administrators are still figuring out a lot of things as they go along.

He says it’s as if we’ve set off on a journey to Mars, but are designing the rocket as we already careening through space.

“Everybody is challenged on every level.”

No replacement for the classroom

DeVille is raising money through DonorsChoose to buy her students supplies such as math manipulatives, so they can do some learning without screens.

And she has plans for extras, such as an incentive system (maybe called “DeVille dollars”) in which kids can earn prizes for mastering concepts.

“I feel like with all the stuff going on in the world, we have to make this year extra fun and extra engaging. There’s just so much going on.”

Meagher also wants to improve her students’ experience. She has a DonorsChoose fundraising project to buy her students glasses that block blue light.

She decided to get glasses after observing the trouble last spring’s class had with long video calls.

“More and more kids were complaining about their vision and their comfort and their lack of being able to connect with their peers on a screen,” she says.

“Whatever tools I can give them to improve their academic performance and their attention span while I’m teaching would be invaluable.”

But no matter how well the technology is working, video chatting is no substitute for being in class with other kids.

“We’ve lost the joy and freedom of being at school and just being a kid,” Meagher says.