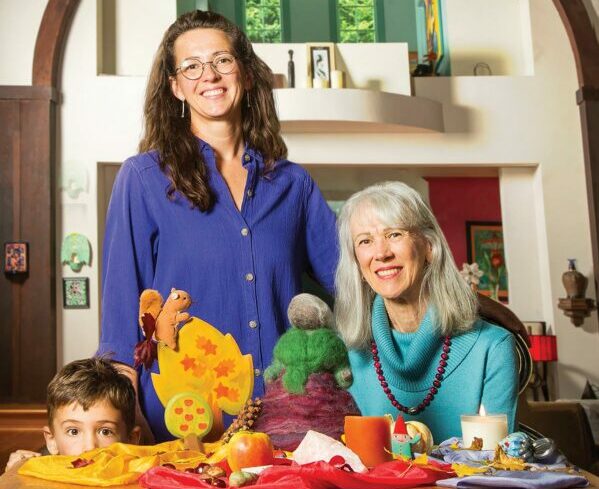 We humans rely on rhythms and patterns to feel secure in our bodies, our families, our communities and in nature, says Susan Payne, MSW, MaTS, CPC, a Seattle-based spiritual director, counselor and grandmother.

“Our breath comes in a rhythm, each day includes rhythms and patterns — sleeping, waking, eating, times of quiet interwoven with active times,” says Payne, who credits Waldorf education for her family’s appreciation of life’s cadences and designs. “We are drawn to and look for patterns and rhythms and cycles in nature and to create them in our lives, because they help us understand our world and our connections within it.”

The why of traditions

And that, says Payne, is why children are drawn to traditions.

Whether it’s weekly Sunday doughnuts, the creation of a nature table at the turn of each season, the annual lighting of Hanukkah, Advent or Kwanzaa candles, or Winter Solstice and New Year’s Eve bonfires, traditions recognize the rhythms and patterns of ordinary life and family connection in extraordinary ways.

They also reinforce family values and belief systems and strengthen family bonds. They provide children with a sense of security —— that is, the idea that some things can be relied on. Traditions leave what researchers call an “emotional imprint” on children, helping them build lasting memories — especially if they are positive. And, perhaps most importantly, they help children form a strong sense of identity.

Showing who we are

A review of 50 years of research published by the American Psychological Society found that traditions “convey ‘this is who we are’ as a group, and provide continuity in meaning across generations.”

Payne points out that family traditions and rituals needn’t be religious to achieve these benefits or to fuel the spiritual development of children. In fact, rituals expand a child’s innate interest in and understanding of “sacred things.”

“For example, I told my almost 5-year-old grandson about a party at my house, mentioned that our family and friends would be there, and said it was on the Sunday coming up,” Payne recalls. “He looked concerned and said ‘What time is it?’ I told him it would be late afternoon. His response was ‘Oh Good! Because if it was Sunday morning, I couldn’t come because we go out for doughnuts on Sunday morning.”

Through his family’s Sunday doughnut tradition, Payne’s grandson is learning not only the cycle of a week, but also gaining understanding of sacred space and time.

“The word sacred comes from the word sacrifice, and is related to sacrosanct. It’s important to create traditions or rituals in our lives or in our family that we decide are important and return to again and again,” Payne says. “My grandson is learning that to enjoy Sunday doughnuts he may have to sacrifice other things.”

Payne’s grandson enjoys several traditions and rituals in his family. Along with Doughnut Day, there’s Ice Cream Day, Baking Day, and the seasonal changes of the family nature table.

“In the most obvious way, the nature table invites conversation about the change of seasons, but more importantly it helps us pay attention,” says mom Meghan DeSpain. This month, as the fall holidays near, the family will collect leaves and other objects from nature, noticing the patterns and changes from summer.

“We typically change the base of the nature table each season, and then adjust and add décor over the three months,” says DeSpain. “Sometimes it looks like a wonderful little scene in nature, with toy animals and bits of plants from our walks, and sometimes it’s chaos.”

As for winter holiday traditions, the young family is starting anew, having moved to Seattle last year. As they always have, they’ll put up white fairy lights in early December to bring in light when the dark comes early. A trip to see “The Nutcracker” may be becoming an annual tradition.

Traditions are one way of teaching children “there may be more than the here and now and more than our stresses and challenges on a week-to-week basis,” says Payne.

“There is something about rituals and traditions that bind us to each other,” she adds. “When you do something and then practice it by doing it again and again together, you’re solidifying a sense of belonging. That belonging or being securely connected to others feeds a child’s spiritual development. Traditions are a glue holding us together until the tradition comes around again.”

Taking part in family traditions can also lead to greater feelings of happiness year-round for all members of a family, according to a series of studies published in the Journal of the Association for Consumer Research.

It’s the numbers that count

“Most surprising, the types of rituals [study participants] described — family dinners with special foods, religious ceremonies, watching the ball drop in Times Square — did not have a direct bearing on enjoyment,” study authors wrote. “But the number of rituals did. Apparently having family rituals makes the holidays better and the more the merrier.”

The best traditions are ones that the majority of the family enjoy. That’s why parenting coach Sarina Natkin, MSW, LICSW advises parents to check in with their own inner child:

“It’s important to explore our own childhood experiences,” she says. “What rituals and traditions brought you joy and which did you avoid? How did you feel connected to your cultural identity as a child? When we have explored these questions ourselves, it becomes much easier to pass along those traditions and values to our children.”

In the same vein, Payne encourages parents to recognize that inviolable does not need to mean inflexible when it comes to traditions. Families, especially grandparents, should be open to new ways of celebrating old traditions as a new generation takes root. And, they should watch for signs that might indicate the magic or meaning of a tradition has evaporated.

Balance: Staying the same vs. flexibility

“It’s a paradox, because the word tradition assumes doing the same thing,” Payne says. “But it’s important to consider the question of how your traditions can also be flexible.”

Payne notes that many holiday traditions in November and December share foundations in  nature, both seasonal and human.

Some whys of winter traditions

“They come at the darkest, coldest time of the year, and many developed over millennia because with the arrival of winter cold and dark came hard questions,” Payne explains. “In those times, people might be asking ‘When will the sun come back? Will we have shelter? Will we make it through the winter, when we can’t work or forage for food?’”

“It’s human nature to want to balance our fear and anxiety around these dark months with symbols, rituals or traditions that give us hope that light (literal, metaphorical or spiritual) will return.

“There are,” Payne adds, “a lot of reasons to buoy ourselves November through January.”