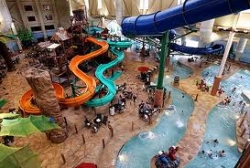 I thought it was high time to figure out whether all the hype I had heard from other parents about the Great Wolf Lodge in Centralia was justified. I mean, could it really be that much fun?

If squeals of utter delight are any measure, it is indeed. We paid a mid-week visit to Great Wolf Lodge, 80 miles south of Seattle, over Spring Break and had a blast exhausting ourselves with all of the activities. The main attraction is the indoor water park, which is accessible only to hotel guests. With an overnight stay, you are allowed two days in the park; after 1 p.m. on the day you check in and the entire next day.

My 5-year-old son and 3-year-old daughter were giddy when they got to our hotel room and found they had their own "log cabin" to sleep in with bunk beds and a TV. We wasted no time getting into our suits, however, and headed to the water park. It was a sight to behold, with hundreds of thousands of gallons of water spurting and splashing around. Thankfully, the temperature is kept at a steamy 84 degrees, so there are no chattering teeth – only smiling faces – to be found.

We started at Cub Paw Pool, the shallow wading area for the littlest of guests with stationary jet skis, two mini water slides and many spraying toys to manipulate. My daughter ended up spending most of our two days here. We then made our way to the large wave pool and rode the curls in inner tubes. We shot some hoops in another pool and checked out Fort McKenzie, a tree house with nearly 1,000 gallons of water that periodically cascades down from a gigantic bucket. Two three-story waterslides at the fort had my son running back for more and, although timid at first, my daughter was enjoying them by the end of the day too.

For children over 42 inches tall, a whole new world is unlocked. With an adult riding along, my son could tackle all but one of the big waterslides in the park. Once he rafted down the River Canyon Run, the "best, awesomest, scream-your-lungs-out waterslide in the world," he was hooked. Between that and Alberta Falls, a fast-paced run with a two-person or solo tube, he was set for the next two days. As a side note, the hotel has a fitness room but don't bring your running shoes – the 101-stair climb to these slides offers plenty of exercise.

We couldn't believe how tired and hungry we were that night, after three hours in the park. Each room has a mini fridge and microwave, so I was pleased that I had packed food. After snacks, we showered and refueled at the on-site Camp Critter Bar & Grille. The menu was casual and surprisingly affordable, with kids' meals priced at $4 or $5. In fact, nothing was too upscale at the lodge. There is a spa, but my husband and I were having too much fun being kids to partake.

We decided to try out the animatronics show in the lobby after dinner. This 10-minute program, where woodland animals come to life to help a boy through his fear of wolf howls, runs three times a day. It was a bit cheesy, but had the kids captivated. Then, a hotel staff member led the pajama-clad group in a stomp, clap and howl, and read them a bedtime story. Gauging by the sleepy eyes in the crowd, we weren't the only ones who had a fun-filled day. We hit the hotel arcade for one last hurrah – glow-in-the-dark air hockey – before bed.

In the morning, we chose oatmeal from the lodge Starbucks instead of the elaborate breakfast buffet and spent another three hours playing in the water. Great Wolf has some appreciated amenities to make it easy on families: Life jackets and towels are provided; the adult wrist bracelets are also room keys, so you only have to sport a cover-up and flip-flops at the park; and there is a snack shack poolside for hungry tummies. I was also impressed with the material used for the flooring; my kids didn't slip once.

I haven't yet mentioned the other main attraction at Great Wolf: MagiQuest. This scavenger hunt sends kids on a journey through the resort with high-tech "magic" wands to unlock secrets and solve challenges in an interactive game. This was a hot ticket item, as there were wands everywhere. My son was enthralled with the idea, so we purchased one for $17. It's another $10 for the game, but he was happy roaming through the hotel and opening up treasure chests, getting pictures to talk and the like. Kids get to keep the wands and use them on return visits.

During our stay, most families had children under the age of 12, but I did see teenagers enjoying MagiQuest and having fun trying to douse each other with buckets of water in the park. The Howlin' Tornado was a favorite of theirs as well. This waterslide carries you through a dark tunnel, down a thrilling drop-off and into a six-story funnel. Tweens and teens may also enjoy the kids' spa, with ice cream pedicures and manicures, and the disco-like tech center with computers, gaming stations and karaoke.

The Great Wolf Lodge is truly a kid haven. If you are seeking a nearby getaway where children reign, I definitely recommend a stay. They won't want to leave.

Taryn Zier is a freelance writer based in Lake Forest Park and mother of two little howlers, ages 3 and 5. 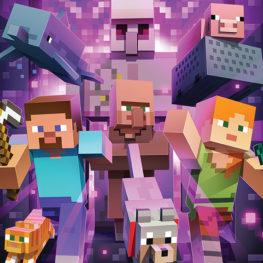