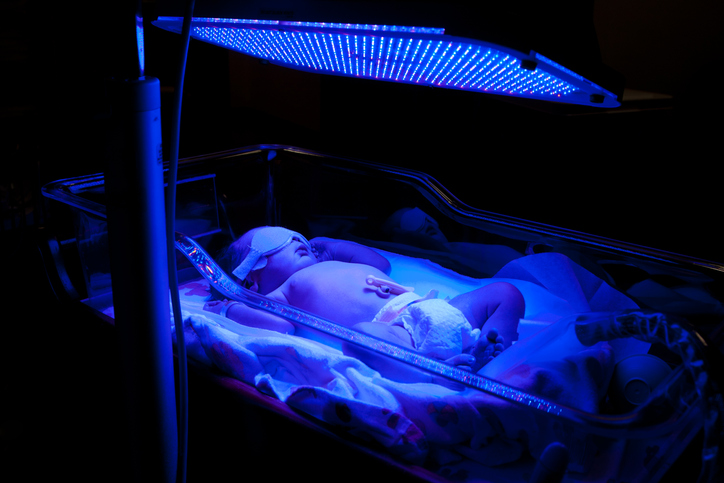 Jaundice. It’s one of those words you just don’t hear much – until a baby arrives. And then you may wonder how you never heard it before.

That’s because nearly 70% of newborns get a mild case of jaundice within the first few days of life as their systems work to remove toxins built up in the liver during gestation. In breastfed babies, jaundice commonly lasts through the first month of life and sometimes longer. For babies fed with formula, most jaundice goes away by 2 weeks of age. In more jaundice-prone premature babies, it may last three weeks or more.

“She looked like a banana,” new mom Karen Osterjy said of her daughter on her fourth day of life last December. A week later, the baby was as pink as a peach and eating and pooping like a machine, which is how most babies clear jaundice.

Why’s is my baby yellow?

Where does the yellow come from? Yellowing of the skin and eyes results when an infant’s level of bilirubin rises to around 3 mg/dL, a condition called hyperbilirubinemia. All blood contains bilirubin. It’s a byproduct of red blood cells and is removed by the liver. When a baby is in the womb, the mother’s liver removes these toxins. After birth it takes a bit of time for the baby’s system to take over this function. Yellowing is usually first noticed in the eyes and on the forehead and cheeks. As the bilirubin level rises, the yellowing moves down the body to the trunk, legs and arms.

When toxins get too high

Bilirubin levels above 20 mg/dL are considered dangerous and could lead to serious health issues, brain damage or even death.

Jennifer Zwick and her husband, Dan Dean, knew “almost nothing” about newborn jaundice when their son was born. “Almost nothing” turned into a nightmare, starting with a missed diagnosis by their midwife just days after Owen’s birth, a rush to the Seattle Children’s Neonatal Intensive Care Unit (NICU), a warning from doctors that Owen might suffer brain damage or even die due to the high level of toxins in his body, and then, after the initial crisis passed, several days of home-based therapy. When first reported, their son’s bilirubin number was 28.

For most newborns, there is a simple fix for newborns: eating. As the baby receives liquid nutrients (breast milk or formula), toxins are purged from the system via the baby’s elimination system. By pooping.

For a much smaller number of babies, including Zwick and Dean’s baby, bilirubin continues to climb and requires treatment and/or hospitalization. Around 1 in 20  newborns will have a blood bilirubin level high enough to warrant treatment, usually light therapy.

The American Academy of Pediatrics recently released new guidelines for the assessment and treatment of newborn jaundice, which recommend testing every newborn for jaundice before they are discharged from a hospital, whether they show signs of it or not. Based on the newest research, the authors of the new guidelines also narrowly raised the thresholds for when phototherapy is required to help lower bilirubin levels. New research since the last guideline revision in 2009 also led the AAP to suggest pediatricians assess and base jaundice treatment on hour-specific bilirubin levels to nip escalation in the bud.

In the case of Zwick and Dean’s baby, the hospital did not conduct a jaundice blood test before discharge. A few days later, their provider dismissed their concerns about their child’s color and lethargy. The new guidelines mean to address such failures.

When should bilirubin levels be checked?

All babies should be tested before they leave the hospital, which varies by hospital. Any baby that is yellowing within the first 24 hours after birth should be tested immediately. Additional bilirubin testing will depend on earlier measured levels, the baby’s age and whether there are other factors specific to that baby that make jaundice more likely.

It is important for your baby to get checked soon after leaving the hospital. In most cases, babies discharged before 48 hours should be seen within 2 days by a healthcare provider. Ask your baby’s healthcare provider about their bilirubin level and schedule a follow-up appointment.

Watch for signs of jaundice

Pediatricians caution parents to call 911 if their newborn infant is unresponsive or difficult to awaken or is not moving or is very weak. See a doctor immediately if your baby:

Perhaps the best tool for preventing dangerous levels of jaundice is for parents to inform themselves about jaundice, its signs and treatment before a baby arrives. For example, it helps to know that certain things increase chances of jaundice, including eating fava beans (broad beans) or using antibiotics, henna, certain herbal remedies or mothballs.

Even if your baby passed the bilirubin test in the hospital with flying colors, it’s important for all babies to be checked for signs of escalating jaundice. Babies who leave the hospital less than 48 hours after birth should be seen by a pediatrician or other appropriate provider within two days after discharge. Be sure to ask for the bilirubin number and when to schedule a follow-up appointment.

If you have concerns, trust your instincts and demand testing.

As Zwick said after her family’s experience: “Don’t listen to anyone who brushes you off. It’s not their baby’s life.”